Nadya Williams grew up in Russia and Israel, and is currently Professor of History at the University of West Georgia. She is a military historian of the Greco-Roman World, and the co-editor (with Nicola Foote) of Civilians and Warfare in World History. 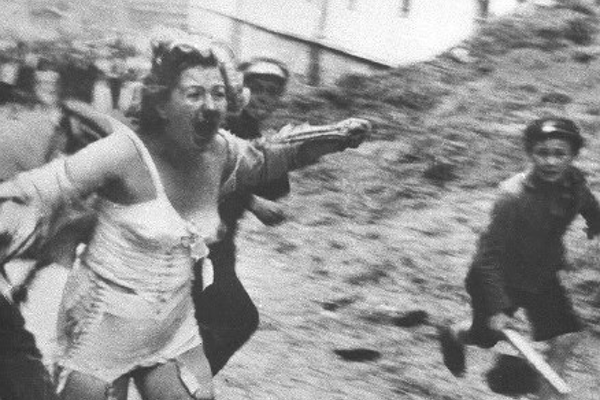 Every year on May 9th, my birth country of Russia marks Victory Day to celebrate the end of the Great Patriotic War, otherwise known as WWII. You may know this holiday as May 8th, but it was after midnight in Moscow when Germany surrendered. But while these particular dates are historical events, they matter less for the story at hand. All that matters is that at some point in the months that followed that surrender, a young Jewish woman boarded a train from an orphanage in Siberia where she had spent the war, and returned to the Ukraine. That woman was my grandmother. Stories like hers remind us that the Holocaust is not quite so firmly in the past, as its impact continues to reverberate on the descendants of survivors. This has been eye-opening for me, as a professional historian who studies trauma in a different historical period.

My grandmother was the older of two sisters, whose mother had died of a brain tumor a few years before the war. As the German army was beginning its ruthless invasion of Western Ukraine in summer of 1941, the extended family decided that it would be best for the father to stay home with the frail younger sister, and send the older one away. The train of children made it out of the Ukraine, but barely – miraculously, the German bombing of the train managed to leave it unscathed. For four whole years, then, she lived in an orphanage. One can only imagine what this was like for a quiet and shy teenage girl, who had been uprooted from home so abruptly and dramatically, and sent to an isolated and impoverished part of the Soviet Union, a region best known for serving as the place of exile for political criminals. The only clue of her experiences there has to do with one of the most basic of human needs: food. She recalled to her daughter, my mother, that the best meal she had at the orphanage came on the day when the director’s horse died.

But after four long years away from her family, she finally got to board a train home. She perhaps wondered why she had not received any mail from her relatives over these years, but mail was notoriously unreliable during the war. It is possible, therefore, that she kept hoping beyond hope that there was someone still left, who was waiting for her return. And so, she may not have known the truth for certain until she got home. But, you see, there was no home left. As it turned out, her father and sister only lived for less than a month after her evacuation in 1941. The rest of her relatives were gone as well, along with the centuries-old Jewish community of which they were a part. The world may have heard of Babi Yar, but there were many such massacres all across the Ukraine. As a result, for my grandmother home-coming was no celebration. Instead, it made her confront indescribable mourning and loss.

The loss of family, community, and an entire tradition must have weighed hard. But one loss surpassed them all, and as a result, went unmentioned: the loss of God. I do not remember my grandmother, as her last visit took place when I was still too young to have memories. I only know her story from the snippets that she reluctantly told my mother over the years. But what I do know is that before the war, the shtetls where my grandparents grew up were vibrant religious communities whose routines revolved around observing the rhythms of the Jewish religious calendar. And yet, in all of her growing-up years, my mother never heard them speak of God. That silence speaks heartbreaking volumes. I am left wondering what they would have said, had they known that their granddaughter’s search to know the God of her ancestors ultimately led her to Christ. After all, it was the self-proclaimed Christian neighbors of the Ukrainian Jews who were so eager to turn them in to the Nazis. And it was these same neighbors who did not welcome the bereaved and orphaned remnant, like my grandmother, back into their communities after the war, and continued to reject and persecute them long after.

My mother, who grew up in the Ukraine, remembers an occasion when she, a young teenager, was walking down the street. A passer-by looked at her distinctly Jewish appearance, cursed at her, and spit in her face. Years later, her father went out for a brief walk in the evening and never came back. A drunk motorcyclist accidentally drove over the sidewalk, killing him. When my grandfather’s identity as a Jew was mentioned in court, the case against the motorcyclist was dismissed. The year was 1981.

I get to reflect on these stories, the family legacy of inter-generational trauma, the Holocaust, and structural anti-Semitism, from a position of safety and privilege as a white middle-class American citizen, and a convert to Christianity to boot. But my mother has sent numerous books over the years to my children. All of them are about the Holocaust.

As a military historian of the ancient world, I study the impact of the trauma of war on people who, in many cases, have been dead for over two thousand years. But in these crumbs of family history that my mother has dropped over the years, I see how trauma is lived out in real human relationships. The Holocaust is not a single event, and through the generations that continue to live out its legacy, it continues to impact real lives of real people today. As historians, we can sometimes forget how personal the tragedies that we study once were, and maybe still are. But as historians, we are also tasked with making sure that the world will not forget. Zachor, al tishkach.