The War Beat, Pacific: How the American News Media Went to War Against Japan

Steven Casey is Professor in International History at the London School of Economics and Political Science. His books include Cautious Crusade (OUP, 2001) Selling the Korean War (OUP, 2008), which won the Harry S. Truman Book Award, When Soldiers Fall (OUP, 2014), which won the Neustadt Prize, and The War Beat, Europe (OUP, 2017) which won the American Journalism Historians Association Book of the Year Award. The War Beat, Pacific is published by OUP in May 2021. 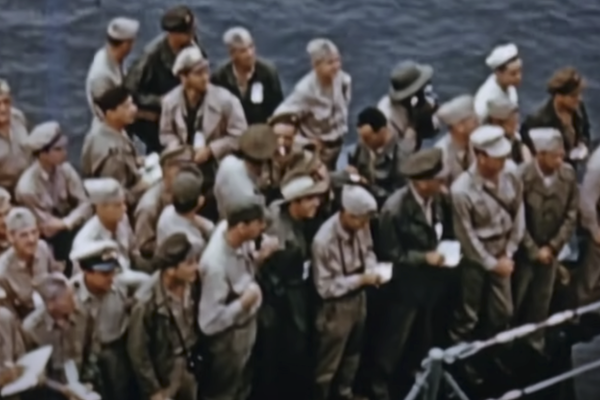 Reporters observe the surrender of Japan on the USS Missouri, Tokyo Bay, September 2, 1945. Still from footage by William Courtenay

Even the barest outline of what had happened was enough to transform America.

The news broke of the Japanese attack on Pearl Harbor just after lunch on the East Coast. Within minutes, mayors had placed their cities on a war footing, FBI agents were rounding up Japanese Americans, and tearful families were gathering at train stations and bus depots as soldiers and sailors, their leaves canceled, headed off to fight. In Congress the next day, every legislator, bar one, voted for the declaration of war, while the Republican leadership pledged to adjourn politics “for the duration.” One opinion survey found the nation “deeply resentful of the treachery.” Another concluded that “commentators of all political hues are in agreement that the first Japanese bomb dropped upon Hawaii wrought suddenly the miracle which no amount of logic or persuasion had previously been able to achieve,” making isolationism “the initial casualty of the war.”

Yet Americans had received surprisingly little information about what had happened in Hawaii on Sunday, December 7, 1941. Early that afternoon, the Navy Department had instructed officers to “place naval censorship in effect.” As a result of this order, one reporter had a news alert cut off halfway through transmission—although, he, like others in the US press corps scattered across the Pacific, did not initially mind. These correspondents recognized the extreme importance of denying operational information, including the numbers of ships sunk on battlefield row, to the marauding Japanese enemy. It was only over time, as the Navy persisted with its policy of super-strict censorship, that their frustration grew, especially once the military’s concerted effort to control the flow of news was compounded by other problems.

Just getting close to the battlefield presented the first challenge. A sea voyage offered an uninviting mixture of long periods of boredom on an alcohol-free ship, punctuated with short bursts of terror whenever someone spotted an enemy plane or submarine. An air trip could be infinitely worse. Some of the planes that the military used to ferry men back and forth to islands like New Guinea and Guadalcanal were unreliable. Correspondents who boarded them knew they were taking their life in their own hands, even if their aircraft managed to miss the terrible tropical turbulence that, as one noted, made the sky “as rough and solid seeming as an angry sea.” Once safely on the ground, the climate was another trial, from the vicious heat and humidity in the summer to the torrential downpours during the rainy season. And then there were the many unsavory aspects of jungle life: “spiders as big as saucers . . .,” observed one correspondent in New Guinea, “butterflies as big as birds, lightning bugs like flashlights.” The mosquitoes posed the biggest menace of all, since they spread malaria; but other nasty diseases also took their toll, including dysentery, dengue fever, and “jungle rot.”

The correspondents who managed to witness the fighting then had to overcome a further series of obstacles. “Stories,” one of them remarked, “had to be flown back to Pearl Harbor, to Australia, or long distances to ships that were far enough out of range of the [enemy] to break radio silence before they could be transmitted. Often, planes were not immediately available for this courier service,” with the result that it “was usually a matter of days before the stories reached the US and found their way into print.” Even then, editors often considered the Pacific War less newsworthy than other theaters, much to the annoyance of the correspondents who risked their neck to report it. A Time reporter in the Solomon Islands in 1943 was so angry when he discovered that his magazine had cut his story to make space for “a new batch of Russian War pictures,” that he sent a cable to his editors protesting “desolate Time’s treatment.” A correspondent who covered the bloody Saipan invasion in the summer of 1944 was equally upset when he discovered how his reports had rated, protesting they had been placed a “very bad fourth,” way behind the D-Day invasion in Normandy and the Republican National Convention.

This sense of neglect was a surprisingly common refrain throughout much of the war. On one occasion in late 1942, Hanson Baldwin of New York Times became so frustrated that he claimed that the Pacific War had become “the ‘unknown war.’” This was an exaggeration. Even at times when military censorship was overly stringent, or when editors were preoccupied with events elsewhere, the home front usually received some basic information on the fight against Japan.

As the war progressed, the situation also began to improve. During 1943 and 1944, both the Army and the Navy made a conscious effort to lift the veil that had descended over the Pacific War. In fact, the two services engaged in a dynamic rivalry, as first one, and then the other, tried to grab the biggest share of the headlines. Douglas MacArthur invariably took the lead, prodding his PROs to devise new methods to speed the flow of stories about his numerous invasions in New Guinea and then the Philippines during 1943 and 1944. The culmination came during the liberation of Luzon in January 1945, when MacArthur’s officers established a “floating press headquarters on three small ships . . . whereby correspondents, PROs, censors, and a transmission set-up were able to move in just behind the assault waves and begin functioning immediately.” The Navy eventually responded, so that during the battle for Iwo Jima in February 1945 it had the capability to send both dispatches and photographs to America in time for publication on the same day—an innovation the press praised as ranking “among the miracles of modern transmission.”

As the war reached its murderous conclusion, not every story was reported in such graphic detail. When the Japanese decided to contest every street in Manila, resulting in the death of more than 100,000 civilians, MacArthur had little desire to draw attention to this aspect of his return to the Philippines. The Navy, meanwhile, remained leery of releasing news on the kamikaze attacks, not wanting the Japanese to know how much damage their suicide pilots were inflicting. Navy censors even blocked the release of one major story on the kamikazes until September 2, 1945, when, as the correspondent who had written it remarked, “it couldn’t hope to compete with the signing of the surrender aboard the [USS] Missouri.”

More than three hundred correspondents, broadcasters, and photographers assembled to record this surrender ceremony, making it, as one reporter noted, “the most thoroughly covered [story] of the war in all theaters.” It was certainly a complete contrast to the first three years of the Pacific War, when Americans received surprisingly little battlefield information about some of the biggest, most controversial events, from Pearl Harbor and the Bataan death march to the Marines’ heroics on Guadalcanal. In this period, the Pacific had been “the shrouded war.”