The Accident that Almost Decapitated the US Government

Stan Haynes is the author of a new historical fiction book, And Tyler No More, in which the explosion on the Princeton is part of the plot. Visit his website at www.stanhaynes.com. 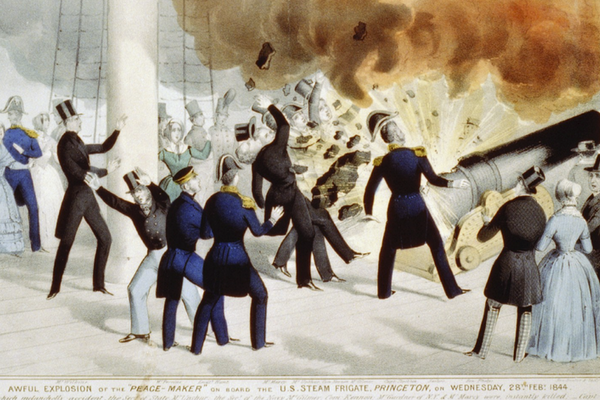 Currier and Ives lithograph of the USS Princeton explosion, 1844

It is the stuff of political thriller novels and a recent television series (Designated Survivor). What if the government of the United States was decapitated by a single event? In reality, one man tried, and failed. In 1865, John Wilkes Booth’s conspiracy succeeded in killing President Abraham Lincoln, but two other targets, Vice President Andrew Johnson and Secretary of State William Seward survived. Fiction stories and Booth aside, such a calamity almost happened—on February 28, 1844, on the calm waters of the Potomac River.

President John Tyler, the first vice president to take the reins of power after a president’s death, wanted a better Navy. William Henry Harrison had died in 1841 after only a month in office. Tyler, a former Democrat, feuded over economic policy with the Whig Party, on whose ticket he had been elected, immediately after taking office. The Whigs tossed him out of the party. The Democrats, miffed at his prior desertion from their ranks, held him at arm's length. Unpopular, especially in the North, Tyler was a president without a party.

His plan to win a term of his own in 1844 focused on the annexation of the Republic of Texas into the Union. Texas, Tyler told his cabinet and friends, was the “great object of my ambition.” But there were two potential foreign problems—Mexico and Great Britain. Mexico, still officially at war with its former province, and the British, still assertive of their power, especially on the high seas, were not expected to quietly stand by and let Texas be absorbed by the United States.

Part of Tyler’s strategy to defend against these potential foreign threats to Texas annexation was a new state-of-the-art warship, a steamship named the USS Princeton. The product of years of lobbying by Captain Robert Stockton, a friend and political supporter of Tyler, the Princeton, launched in September 1843, was a prototype for the modernization of the Navy. In an era when vessels of war were still sailing ships, steamships, with clunky paddlewheels, exposed engines, and limited range due to fuel requirements, were viewed with disdain by Navy Department officials. Incorporating the design and innovations of John Ericsson, a Swedish inventor that he had befriended, Stockton’s Princeton was a steamship with a difference. Instead of a paddlewheel, it had a screw propeller system that connected to engines hidden within the hull, where they were protected from enemy fire. Its boilers burned efficient anthracite coal, increasing its range. It was a hybrid, also able to run under sail, with its smokestack collapsible, reducing wind friction and increasing its speed.

Moreover, Stockton determined to make his ship the most powerful warship afloat. He had two twelve-inch bore wrought iron cannons placed on her deck. Named the Peacemaker and the Oregon, each was designed to hurl a cannonball weighing more than two hundred pounds downrange, with accuracy, for almost five miles. His ship, bragged Stockton, was virtually “invincible against any foe” and her innovations and deadly force “may be productive of more important results than anything that has occurred since the invention of gunpowder.” After touting the ship in Philadelphia and New York, Stockton brought the Princeton to Washington in February 1844 to show it off to the nation’s political elite, and to get funding for a fleet of warships like her.

In order for those in power to see his ship up close, Stockton planned three afternoon excursions down the Potomac River, starting at Alexandria. The most important of these was set for February 28, when President Tyler, most of his cabinet, members of Congress, their wives, and other important guests, would be aboard. The ship’s massive cannons would be fired three times in route for all to see, a mid-nineteenth century version of shock and awe by the American Navy. The National Intelligencer proclaimed that that the cream of Washington society would see firsthand “this splendid and unequalled specimen of our naval ingenuity, and to witness something of the performance of her formidable battery.”

February 28 dawned a cloudless late winter day in the nation’s capital. Once the ship was underway, Captain Stockton, a wealthy man, spared no expense in entertaining his guests, serving a meal of the finest delicacies, along with plenty of wine and champagne. Stockton decided that the Peacemaker would be the cannon fired on the cruise. The first two firings went smoothly and all were suitably impressed. The third, to honor George Washington as the ship was on the Potomac near Mount Vernon, was scheduled for just after the guests finished eating. At the table, a beaming Tyler had offered a toast, “To the three big guns—the Peacemaker, the Oregon, and Captain Stockton.”

Topside, on the Princeton’s bow, most of the cabinet, and several senators and congressmen, then gathered behind Stockton for the third firing. Word was received that the president was detained below and to proceed without him. As the Peacemaker was fired, it exploded, hurling chunks of iron, some weighing more than a ton, across the deck. When the smoke cleared, eight were dead and almost thirty wounded. Among the dead were two cabinet members, Secretary of State Abel Upshur and Secretary of the Navy Thomas Gilmer. Had Tyler been present, he would have been standing with them and likely would have met the same fate. As he was headed up the steps for the third firing of the cannon, several people began singing an old song that was one of his favorites from his youth, and he stopped to listen. Flirtation may also have been on his mind. The widowed president had earlier been sipping champagne below deck with a young New York socialite that he had his eye on, Julia Gardiner, who was on board with her father and sister. Her father was among the fatalities in the explosion. Within months, Tyler would make Julia his bride.

In early 1845, in the waning days of his administration, President Tyler, after many political battles over the issue, accomplished his goal and signed a law formally annexing Texas into the Union.

The office of vice president had been vacant since 1841, when Tyler became president upon Harrison’s death. There was no procedure for filling a vacancy in that position until the enactment of the Twenty-Fifth Amendment to the Constitution in 1967. Had Tyler been killed in the explosion on the Princeton, the president pro tem of the Senate, Senator Willie Mangum of North Carolina, would have assumed the presidency. Mangum was a Whig, a loyal member of the party that had kicked out Tyler, and was an opponent of the annexation of Texas.  But for a song, history would likely have been changed.