by Thomas Lecaque and J.L. Tomlin

Thomas Lecaque is an associate professor of History at Grand View University in Des Moines, Iowa, specializing in the nexus of apocalyptic religion and political violence. Follow him on Twitter: @tlecaque.

J.L.Tomlin is a lecturer of Early American History at the University of North Texas, specializing in the politics of American religion. 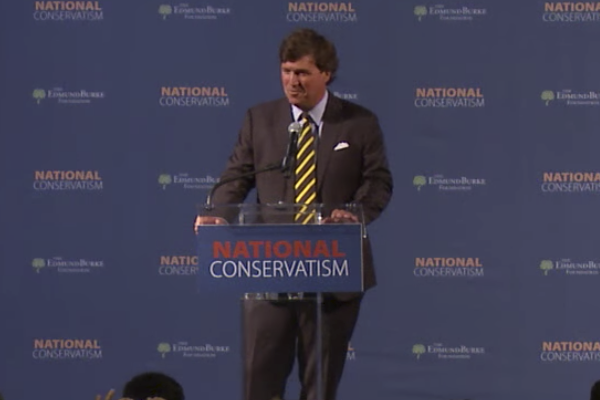 Fascist groups attacking Pride rallies. Christian nationalists praying for the death of the President and saying that Jesus would have survived if the government hadn’t taken away his AR-15. Congressional hearings on the attempt of the Trump Administration, alongside militia groups, to overturn our democracy. Former President Trump taking the stage at a “Faith and Freedom” convention to say he would pardon all of the January 6th defendants if reelected.

In the midst of these events of the past month, The Edmund Burke Foundation decided to take to the pages of The American Conservative to push their manifesto, titled National Conservatism. The Foundation has found a way to save Western Civilization from a “homogenizing, locality-destroying imperium” by imposing a homogenous, centralized imperium. All you have to do is invent the past and rebrand the present to create a dystopian future, one they relish.

We keep seeing fascism not just creeping, but openly marching across America. It's the insurrection on January 6th, and it is Patriot Front, and it is all of the other visible symbols. But historians know that fascism doesn't just come waving swastikas and burning down the Reichstag--it comes in business suits, it comes with conferences, it comes with intelligentsia explaining why the ethnostate surely doesn't require massacres, at least not until after the camps are built.

National Conservatism is that wave, carefully made up, well dressed, thesaurus open and ready, proclaiming fascism without ever wrapping sticks around the ax.

Against the backdrop of the Congressional proceedings on Donald’s Trump’s conspiracy to overthrow the 2020 election, The Edmund Burke Foundation has published a new statement of American conservative principles (they are against riots). These principles, something between a statement of grievances and a bullet-pointed ideological manifesto, are presumably another stab at the ever-elusive articulation of what exactly American conservatism actually means. But in their zeal to redefine conservatism, they imagine an American state that never existed. At length, they claim their love of all things American by rejecting most Americans. Perhaps most tellingly, they outline the contours of a state quite opposed to the virtues (they love this word) with which the American state is associated.

As most reactionaries do, they proclaim their project one of “restoration.” And as with most restorations, its relationship to history is tenuous. For the EBS, the American “nation” was and is an Anglo-Saxon project (point 6). Never mind the dozens of European, African, and Native nations present before the idea of America existed. Never mind the subsequent generations of immigrants from every continent whose presence—assimilated and unassimilated—made them integral to the evolving nature of a melting pot society. In fact, immigrants who don’t sufficiently assimilate to their imagined Anglo-Saxon enterprise need not be allowed entry (point 9). They imagine a country founded on Christian orthodoxy, forgetting state-sponsored Christian orthodoxy was a prime fear and founding grievance of the American project . But state-sponsored and enforced Christianity is precisely what they advocate: “Public life should be rooted in Christianity and its moral vision, which should be honored by the state and other institutions both public and private” (point 4). What of the large percentages—present at every stage of our colonial and national history—of Americans who do not conform to this orthodoxy? What type of Christianity from what era or region is not specified, but the point is clear: If you fall outside that vague classification there’s no room for you. Bibles are to be read in public schools and universities, and any who refuse to enforce public Christian conformity “do not deserve taxpayer support unless they rededicate themselves to the national interest”(point 7).

If this sounds familiar, it’s because Vladmir Putin recently said the same thing in justifying his authoritarian state’s violent suppression of dissent. What room, you may ask, does such a view of the American state leave for the individual? We are spared guesswork by the signatories of the manifesto who overtly state their contempt for “unconstrained individualism” that condones “sexual license and experimentation” (point 8). This is the high regard for personal freedom their brand of conservatism professes: Good for me, but not for thee. Free enterprise? They claim it’s the lifeblood of prosperity and freedom. Except if it advocates ideas disliked by their imagined, purified state or allows public opinion (demand) to influence policy (supply) they see as inconvenient to their imagined nation. What’s the solution to transnational corporate power and the intricacies of the world economy? Banning pornography and undesirable personal habits. There’s no explanation of what the latter term means, but since they make clear that civilization exists solely because of “a lifelong bond between a man and a woman”(point 8) that produces children, we can certainly infer who isn’t included.

National conservatism, perhaps because of its ideological and teleological ties to National Socialism, goes to great lengths to separate their “decent nationalism” from racism and all forms of racial oppression. Of course, what they omit is that nationalism itself is implicitly tied to notions of superiority and inferiority, the softened form of which they hope to market as a kinder and friendlier form of authoritarianism. All are welcome, but not to be empowered. Tolerance means allowing you to live here, but not to rule yourself or live differently. Think “compassionate fascism.” Of course, they don’t use the term fascism and that terminological strategy seems to be highly prioritized in this new reordering of reality.

“Fascism” as a term has come to be highly loaded in its modern usage, primarily because every iteration of the political philosophy throughout history has resulted in an immeasurably catastrophic shifting combination of war, genocide, oppression, and state-controlled informational darkness. Reality is so comprehensively undermined and reordered that truth itself becomes a seemingly extinct concept. The authors of such a set of principles are aware of the need to try to rebrand such a systemic approach to government and society, but call it what they will—National Socialism or National Conservatism—it’s still just fascism. From the subordination of the individual to the needs of an emotional “national interest,” to calls for the exclusion and disempowerment of anyone and everyone who prevents, somehow, somewhere, the return to a mythical past—this is just fascism. Sophomoric combinations of these discarded concepts through dead-eyed sentences don’t alter that basic fact. They don’t even really try to find new catchphrases or justifications. It’s just tired ideas in new packaging.

And what would happen if they achieved their dreamed-of state, wherein the government both supported and enforced a homogenous, generically Christian orthodoxy, diminishing any attempt at individualism or dissent as unvirtuous, unwelcome, or even dangerous and worthy of suppression by force? The Foundation claiming the legacy of Edmund Burke would do well to remember the fate he foresaw for any government seeking to rule as they now advocate:

“If that sovereignty and their freedom cannot be reconciled, which will they take? They will cast your sovereignty in your face…Let them always keep the idea of their civil rights associated with your government-they will cling and grapple to you…let it be once understood that your government may be one thing and their privileges another, that these two things may exist without mutual relation-the cement is gone, the cohesion is loosened, and everything hastens to decay and dissolution.”

It would be easy to pretend that this manifesto is something remote and abstract, not something to be concerned about. But the Edmund Burke Foundation has a much longer reach than you would expect. Their conferences read like miniature CPAC’s from this past year–bringing in figures from the right and far right in Europe with similar figures from the United States. Prime Minister Viktor Orban of Hungary, whose authoritarian regime has been praised by the American right, Giorgia Meloni, a leader of the far right Brothers of Italy party (who spoke on “God, Homeland, Family” in 2020), MP Mattias Karlsson of the Sweden Democrats, and Prime Minister Mateusz Morawiecki of Poland, whose Law and Justice Party had been following Orban’s path until the war in Ukraine, have all spoken at the “National Conservatism Conferences” the Foundation has held in Europe. At the American conferences, you find familiar names like J.D. Vance, Tucker Carlson, Peter Thiel, John Bolton, Josh Hawley, Ted Cruz, Marco Rubio, Rod Dreher, and Chris Rufo, who, among all the others, also spearheaded attacks on Critical Race Theory, admitting that the actual theory did not matter but that it was a useful assault of public education, and this week in the midst of fascist attacks on Pride events advocated using ever more aggressive language against drag shows to promote further violence. This manifesto, this think tank, brings together the far right in Europe and the United States, brings together various brands of the far right, and gives them a framework, a common language, and a shiny brand to follow: National Conservatism, your friendly neighborhood fascist, here, there, everywhere.

The key is to remember that however disparate the groups appear to be, they are fellow travelers in service of the same fascist dream. The Texas GOP platform adopted last week and the Patriot Front intention to attack a Pride Rally and the Oathkeeper assault on the Capitol on January 6th are, in fact, part and parcel with the "National Conservatism" manifesto. Fascism creeps and it crawls but it also marches and saunters and publishes editorials as it destroys democracy. The Edmund Burke Foundation says it knows how to prevent the decay of the Western world. Edmund Burke said the politics of coerced conformity and obedience, in the end, will be the prime causes of it.