Kathryn Smith is the author of The Gatekeeper: Missy LeHand, FDR and the Partnership that Defined a Presidency (Atria, 2016) and Gertie: The Fabulous Life of Gertrude Sanford Legendre: Heiress, Explorer, Socialite, Spy (Evening Post Books, 2019). 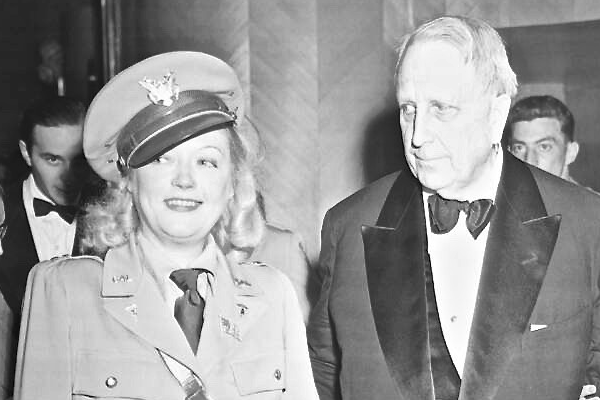 In our hazy collective memory about Franklin Roosevelt, the Great Depression and the march toward World War II in the 1930s, we sometimes assume the people of the United States were absorbing the printed and broadcasted words of an objective and fair news media.

Nothing could be farther from the truth, as University of California, Davis history professor Kathryn S. Olmsted ably proves in her deeply researched book The Newspaper Axis: Six Press Barons Who Enabled Hitler. Not only were some of the foremost newspaper publishers of the day needling FDR with stilettos on their editorial pages, but they also even imposed their views on their reporters. “Fake news” was as evident in those days as it is today.

Hitler and FDR came to power within a couple of months of each other in 1933. When we think of the dire situation in the country when Roosevelt was elected in 1932 — 25 percent unemployment, the banking system collapsing — it’s amazing to think that he was endorsed over Herbert Hoover by just 41 percent of the nation’s newspapers — and that was the high-water mark. The fact that FDR continued to win re-election — carrying all but two states in 1936 — is a testament to the popularity of his programs and the power of his personality.

FDR was opposed on both the domestic and foreign fronts during most of his time in office by the press lords Willam Randolph Hearst, owner of a network of newspapers and radio stations whose motto was “America First,” and Col. Robert McCormick, publisher of the Chicago Tribune, the self-proclaimed “world’s greatest newspaper.” While initially supportive, McCormick’s cousins, siblings Joseph and Eleanor “Cissy” Patterson, eventually turned on FDR too. Joe Patterson published the largest circulation newspaper in the country, the New York Daily News, while Cissy published the largest circulation newspaper in Washington, the Times-Herald. As a group, they reached 30 percent of the American newspaper-reading public every day.

Not only that, but Hearst, McCormick and the Pattersons had cozy ties with two powerful press lords in England, Lord Rothermere and Lord Beaverbrook, who were supportive of Mussolini and Hitler until the day German armies attacked Poland in 1939 and continued preaching appeasement until the war escalated with the attacks on the Netherlands and France the following spring.

McCormick’s vitriol easily matched that of the better-known Hearst. He called the New Deal the “Raw Deal” and instructed his White House correspondent to label the federal work relief programs “government easy money.” When the Lend-Lease bill was debated by Congress in 1940, the Chicago Tribune called it “the Dictator Bill” in all its coverage — without using quotes around the mocking nickname. McCormick was convinced that every Roosevelt program and action was designed to make him the country’s dictator, but he was willing to give a true dictator like Hitler a pass because of his own fierce isolationism and hatred of communism. Apparently, a fascist dictator trumped a communist one.

FDR and his supporters were able to neutralize some of the power of Hearst, McCormick and the Pattersons regarding Lend-Lease and the need to rearm the country with tools such as FDR’s Fireside Chats over the radio and the growing popularity of commercial radio and motion pictures. Henry Luce, publisher of Time and Life magazines, owned a radio program and a movie newsreel service, both called the March of Time. Although he had opposed the New Deal, he fully appreciated the situation evolving in Europe under Hitler and covered it accordingly in his media.

It’s hard for us to appreciate today the power of the movie newsreels. Americans spent most of every entertainment dollar on movie tickets in the 1930s, and the March of Time mini-documentaries “were seen by more than 20 million Americans every month,” Olmsted writes. There was also a sea change in the late 1930s and early 1940s in how Americans received their non-local news. By 1942, polls found that 62 percent preferred to receive it from radio. Broadcasts from war-torn Britain in 1940 by CBS radio man Edward R. Murrow and others moved Americans from the isolationism of Hearst, McCormick and the Pattersons.

After the fall of France in June 1940, Hollywood began producing more anti-Hitler films, especially those vilifying the Nazis and praising the English. They included Alfred Hitchcock’s Foreign Correspondent and Daryl Zanuck’s A Yank in the RAF.

Olmsted deftly interweaves the stories of the conservative press in the two countries through the 1930s and beyond. Although Lord Beaverbrook took major posts over war production in Churchill’s government, after the war he reverted to type, opposing the Marshall Plan, the United Nations and the European Common Market. Olmsted notes that Rupert Murdoch, who went on to found Fox News, was a protege of Beaverbrook’s in the 1950s. He learned at the knee of a master and helped engineer Brexit.

She concludes her powerful book with this eloquent paragraph:

“We can still hear the echoes of their voices today — in the anti-European headlines of the [British] Daily Express and the Daily Mail, in the angry populism of Fox News and Breitbart, in the nationalist speeches of Boris Johnson and Donald Trump. ‘From this day forward a new vision will govern our land,’ President Trump promised in his inauguration address. ‘From this day forward, it’s going to be only America First — America First.’ The last of the press lords died more than a half century ago, but their heirs continue their crusade for nation, for empire, for the ‘white race,’ and for Britain and America First.”