The Chicano Moratorium in East LA and Ventura County 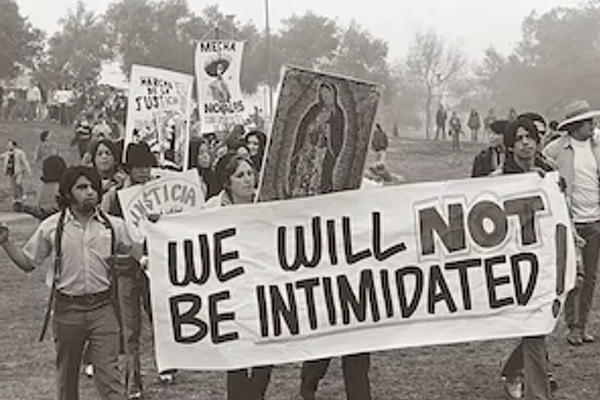 It was on its way to being a completely wonderful Saturday. August 29, 1970.

People from barrio communities and ag towns throughout the West—Denver, San Antonio, Seattle, and nearby cities in Ventura County like Oxnard and Santa Paula—journeyed to East Los Angeles to participate in another Chicano Moratorium, of a scheduled series, demanding the end to the US war in Vietnam.

Ethnic Mexican sons, brothers, boyfriends, and husbands had died there disproportionately (20 percent) to their number in the Southwest (14 percent), according to a 1968 report by political scientist Ralph Guzman.

But this was just one data point of a web of racist-classist oppressions that ethnic Mexicans in the US endured. Like the true believers who followed César Chávez from Delano, California to Sacramento in 1966 to shed public light on the farming industry’s exploitation of workers and the students who walked out of East Los Angeles high schools with moxie in 1968 to demand an equal education, politicized ethnic Mexicans and their allies that summer day similarly took over streets to also demand an end to incessant police brutality in their communities and a school pushout rate that exceeded 50 percent, making youth particularly susceptible to the draft and lowered life chances.

Furthermore, demonstrators, many of whom embraced the Chicana/o epithet, viewed the event as more than a protest. It was also a parade celebrating the splendor of their culture by way of comity, song, and dance.

To support the petition of grievances of their daughters and sons, parents attended the event with their younger offspring in tow.

As educator Sal Castro lachrymosely declared after the student walkouts two years before, it was a beautiful day to be a Chicano!

Then Los Angeles County sheriff's deputies violated the convivencia as they pursued liquor store robbery suspects. At the park they found themselves pelted with bottles and rocks—not an unusual scene in communities that regularly suffered indignities and the lethal abuse of law enforcement. Witness Maria del Socorro Urias Muñoz, mother of Rosalio Muñoz, chairman of the National Chicano Moratorium Committee, commented decades later, “The sheriff had no business coming into that park.”

But Chicano resistance would not be allowed to pass unchallenged. So, the embattled deputies called in backup, after which they stormed the park, mercilessly rocking people with their batons and teargassing men, women, children, the elderly, and even a wheelchair-bound person.

Consequently, over one hundred were arrested, many wounded, and three persons would die: Lyn Ward, Angel Gilberto Díaz, and Ruben Salazar, the martyred Los Angeles Times columnist and KMEX news director considered by fans as the intrepid voice of the ethnic Mexican community.

Not to be intimidated, the NCMC and autonomous like-groups such as one in Oxnard vowed to move forward with their planned demonstrations to maintain and expand the power of their movement.

In fact, the stomping of Chicano activism on August 29th galvanized El Movimiento. Hunter S. Thompson shrewdly contended in Rolling Stone Magazine the next year that the homicide of Salazar by deputy sheriff Thomas Wilson at the Silver Dollar bar after the disruption of the peaceful assembly at Laguna Park transformed conformist ethnic Mexicans. He wrote

Middle-aged housewives who had never thought of themselves as anything but lame-status “Mexican Americans” just trying to get by in a mean Gringo world they never made suddenly found themselves shouting “Viva La Raza” in public. And their husbands—quiet Safeway clerks and lawn-care salesmen, the lowest and most expendable cadres in the Great Gabacho economic machine—were…[now] calling themselves Chicanos.

Three weeks after the tragedy at Laguna Park a Chicano Moratorium demonstration billed emphatically as a peace march took place in Oxnard on September 19. An estimated one to three thousand marchers from all walks of life, places, and a span of generations came together to again claim the streets. From La Virgin de Guadalupe Church, demonstrators paraded through La Colonia, the city’s version of East LA, and the downtown district with a coffin representing ethnic Mexican servicemen killed in Vietnam.

Former Brown Beret Peggy Larios of the city of Ventura recalled elders of her community defiantly marching with her. Hence, for this moment, no matter their generational designation and citizenship, they were all Chicanas and Chicanos.

The procession concluded at the Oxnard Community Center with poetry, music, dance, and speeches. Rosalio Muñoz spoke characterizing the war as the “systematic murder” of Chicanos.

Before the peace march, men and women of the Oxnard Brown Berets leafleted Ventura County neighborhoods. Roberto Flores, a UCLA classmate of Muñoz, and other organizers trained monitors to avoid a catastrophe such as had occurred on August 29th. To this end, the Berets and MEChA students from the community colleges of Moorpark and Ventura, as well as high school youth, conferred with Oxnard Police Department chief Robert Owen and circulated a code of conduct to the media.

The Moratorium Committee’s dialogue with law enforcement and a public relations campaign garnered goodwill in the community. Indeed, the Oxnard Press-Courier commended the organizers in an editorial, in which it acknowledged the disproportionate ethnic Mexican casualty rate. It also praised, in a backhanded manner, the police for their “diplomacy and restraint” leading up to and during the march.

Chicano Moratorium commemorations continue today in communities in and out of East Los Angeles as they mark a history that centers on the experience of ethnic Mexican and Latinx peoples in the US to inspire and reinspire the young and old, to continue their struggle to realize the ideal of justice for all.