Megan Threlkeld is the Michael G. and Barbara W. Rahal Professor of History at Denison University. Her most recent book is Citizens of the World: U.S. Women and Global Government (University of Pennsylvania Press, 2022). 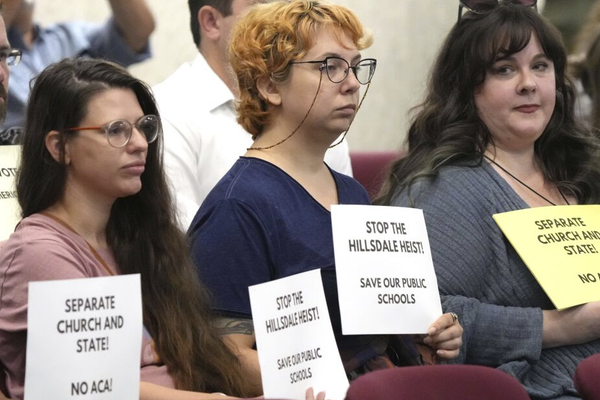 Tennessee residents protest the application of Hillsdale College to operate charter schools in the state.

Curriculum wars over teaching America’s past are nothing new. They have long been part of the broader history and culture wars. But at the heart of the latest skirmish, over the Hillsdale College 1776 Curriculum, is something we haven’t seen before.

Hillsdale College is a conservative Christian institution in rural Michigan, proud of its defense of “our Western philosophical and theological inheritance” and scornful of the “dehumanizing, discriminatory trend of so-called ‘social justice’ and ‘multicultural diversity’.” Inspired by the report of Donald Trump’s 1776 Commission—chaired by Hillsdale President Larry P. Arnn—the college developed its 1776 Curriculum to help K-12 educators “provide an education that is both classical and American,” centered on the traditional liberal arts and sciences, with a particular emphasis on “the principles of moral character and civic virtue.”

The portions of the American History, Civics, and Government curriculum that have been released so far total almost 3000 pages, all designed to instill in students a respect for “their inheritance as Americans.” Lessons center on biographies of exceptional figures, those who have had an “outsized impact” on the United States and serve as inspiration for students to identify with and emulate. It claims not to “whitewash or rewrite,” to teach the “bad” and the “good,” and to adhere strictly to the “true story of history,” which it asserts is both knowable and unchanging. The goal is to offer students “the wonder, opportunity, and capacity to honor and preserve what is good in their country, while condemning and correcting its flaws, for the good of America and their fellow Americans. Such a knowledge and love is the very highest meaning of patriotism.”

This nationalist approach to a K-12 social studies curriculum has a long history. In the 1890s, alarmed by social changes wrought by the influx of “new” immigrants from Southern and Eastern Europe, many of whom were not Protestant, not considered white, and did not speak English, Progressive reformers turned to social studies and civics curricula as a way to Americanize and assimilate young newcomers. Through lessons on the wonder of the American experiment and stories of perseverance and sacrifice, children learned both patriotism and the principles of responsible citizenship in a democracy.

Indeed, the parallels between Progressive-era arguments for civics and history education and the Hillsdale Curriculum are striking. In 1894, the United States Committee on Secondary School Studies (known as the Committee of Ten) argued in its report to the National Education Association that “history furnishes the best training in patriotism.” Americans, they believed, needed such training because many “know that our country is great better than we know why it is great.” Five years later, a similar committee, this one established by the American Historical Association, emphasized that the “great and noble acts and struggles of bygone men” would give students the “impulses and honorable prejudices that are the surest sources of permanent and worthy refinement.”

Present-day battles over the content of the Hillsdale Curriculum are also familiar. Like the 1776 Commission, it originated in the backlash to the 1619 Project and conservative fears that elementary and secondary school students were being indoctrinated in Critical Race Theory. Hillsdale subscribes to a colorblind approach that rejects teaching histories of people of color, on the principle that doing so “teaches students to discriminate” and “undermines the inherent dignity” and equality of all people. It erases those histories in the same way that earlier curricula erased that of Catholics, immigrants, and other marginalized groups.

But there is a new element to the debates over the Hillsdale Curriculum. The Committee of Ten, the AHA, and Progressive reformers were focusing on bolstering public education. Public schools, they believed, were the seedbeds not only of democratic citizenship but of social order, economic productivity, and state-building. At their best, public schools offered equal opportunities for all Americans to become engaged and productive citizens.

Hillsdale College, by contrast, is waging an all-out war on public education. The college and its acolytes are the driving force behind the movement for “school choice”—the idea that parents should be able to use public funds to send their kids to whatever school they want, including charter schools, private, and even religious schools, or to homeschool them. School choice not only siphons money away from already underfunded public schools and redirects it toward those run by private interests with limited or no state supervision. It also severely limits the options of students who cannot navigate the landscape of choices or afford the additional transportation, tuition, and other costs of attending any school other than their local public one. Hillsdale has opened more than twenty charter schools since 2010, most recently under the guise of American Classical Education, a charter school operator now seeking to open dozens more “classical academies” across the country.

All of Hillsdale’s charter schools use the 1776 Curriculum, and 50 others have officially licensed it, though that likely underestimates its impact, because it is freely available online. Arnn claims the college’s open online courses have reached more than 3.5 million students. The curriculum, in the minds of its supporters, is the answer to supposed “Marxist” or “woke” indoctrination in social justice and “reverse racism” that they believe has become the hallmark of public schools. Education is the “weapon,” as Arnn likes to call it, that conservative Republicans will use to “retake” America from the left.

The curriculum’s influence reaches beyond the movement for school choice. It is also a key component of the push for “divisive concepts” bills and other educational gag orders that swept the country in 2022 (and will likely return in 2023). In 2018, the then-state superintendent of Arizona tried unsuccessfully to replace the state’s standards for history and science with a set developed by Hillsdale. The curriculum’s principles have also been embraced by legislators pushing gag orders in Florida, South Dakota, Virginia, and elsewhere.

So while both the architects of the 1776 Curriculum and Progressive reformers of the 1890s championed curricula that would foster patriotism and nationalism, the similarity ends there. The Hillsdale Curriculum critiques the Progressive Era as an unwarranted expansion of government and characterizes its leaders as socialist bureaucrats who rejected America’s “true” principles of limited government, free-market capitalism, and individual rights. But unlike Hillsdale, those earlier reformers believed public schools could be a force for good—an “embryonic community,” in John Dewey’s words, where students would internalize the “spirit of service” and learn the “instruments of effective self-direction.” Progressives’ impact echoes ironically in the label school-choice advocates now use to denounce public schools: “government schools.”