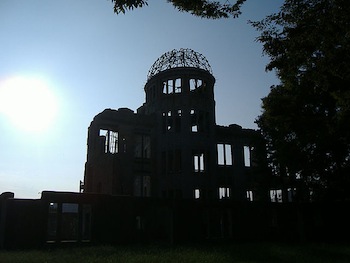 The three A bombs dropped on Hiroshima, Nagasaki and a third that failed to explode were neither dropped to forestall a Japanese defeat of the USA military machine nor to address a crucial military imbalance that would lead to Japanese military occupation of the USA.

Nor were these bombs used to break the back of the
Japanese army compelling it to surrender and stop fighting.

They were used to break the will of the Japanese nation through its civilian population by inflicting huge material damage, tremendous, immediate and prolonged, human suffering and countless civilian casualties.
For the first time in modern, possibly all, history the most lethal means of war were directed consciously and specifically against the civilian population of the enemy; the crushing of which would lead its military machine to capitulation.

This American breakthrough in strategic thinking and application; the all in war to break a nation's will to fight on by targeting and crushing its civilian population and NOT its military machine was also used by the USA in Viet Nam where the A bombs, for PR considerations, were supplanted by a judicious mixture of conventional, chemical (deforestation) and radioactive weapons aiming to achieve the same goal with an equal amount of lethality.

By erasing the difference between civilian and military targets It seems inevitable to conclude that the American use of A bombs against Japan is the legitimate forefather, and legal precedent, of many things that followed including "terrorism" as with ETA, IRA, the PROVOS and Palestinian resistance movements.
One thing though inevitably springs to mind: ETA, IRA, the PROVOS and the Palestinian resistance movements, irrespective of the justice of their respective causes, had no other alternative means of war, the USA had!

The use of singular weapons of incredible destruction were preceeded by firebombings of:
LONDON, Berlin, Dresden, Tokyo and others, where MANY, many more civilians died than military personnel.

Let us address the Japanese attrocities in China, the Nazi genocide programs, Stalins millions-murdered BEFORE you question the actions of the nations that STOPPED those horrors from enveloping the world.

You tee up the straw man - and then you proceed to cut his head clean off!

Where does one begin to address your sophistry?
Three atom bombs dropped? You care to produce a source for the story of the 3rd one that didn’t explode?

The use of these weapons was wrong because they weren’t used to, “forestall a Japanese defeat of the USA military machine nor to address a crucial military imbalance that would lead to Japanese military occupation of the USA.”? It counts for nothing in your world that the Japanese nation was the aggressor Word War II, does it? Or, that a conventional invasion of the mainland WOULD HAVE resulted in thousands of Allied casualties and millions of Japanese.

A-bombs were not used in Vietnam for PR reasons? Proof? But “radioactive” weapons were used? Cite?

And, at last, we come to the whole point of your ill informed screed; American action in WWII was the forefather of today’s terrorism. Your moronic attempt at moral equivalence while tearing up the trail markers of reasoned debate sickens me. The only thing you left out of your oh so predictable ant-American rant was a Hitler reference. I’m sure you’ll work one into the next post.

The horror of the two nuclear bombs exploded over Hiroshima and Nagasaki were only the prelude to the unspeakable attrocities committed against the Earth.

Japan got what it deserved for its aggression, insane Imperialism and submission to "warlords" of the military.

The Earth did not deserve what it received in the aftermath of those first explosions at the USA test site and two Japanese bomb sites.

We continued to contaminate the atmoshpere, the water, the earth, and the "genes" of tens of thousands with the dirty remnants of the atomic and subatomic particle fallout of the thousands of tests performed by the USA, USSR, China, India and others.

We now await the decisions of the radicals and current rulers which city is next? Mecca or New York?