Nicolaas Vergunst is the author of "Knot of Stone: the day that changed South Africa’s history," available at Amazon.com. He currently lives in France with his wife, herself an independently-minded historian from Leiden. His website is www.knotofstone.com. 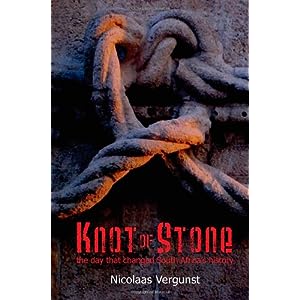 I was never keen on blind dates.  All the anticipation, uncertainty and potential disappointment seemed too stressful.  So I avoided such scenarios.  Now I know we can’t avoid these in history.

Like blind dates, first encounters can be strenuous and tend to be remembered differently by both parties.  In a worst-case scenario, what may have seemed a romantic conquest for one could have been date rape to another.

Historically, first encounters are also strenuous affairs.  These usually occur on the beach or beside a riverbank—rather than in a rosy-colored tavern—and their memory differs too, such as 1492 or 1498 when Christopher Columbus and Vasco da Gama wooed the Indians on both sides of the world.  It’s no wonder then, that Thanksgiving is such a contested event today.

As we all know, the origins of Thanksgiving go back to 1621 when Pilgrims and Wampanoags first celebrated a bountiful harvest together.  Then more a rendezvous than a blind date, both sides still quarrel about the food, the bill, and that there’s no such thing as a free lunch today.  In the 1620s it was a three-day feast.

The reality behind the myth is that most agrarian societies celebrate the end of harvest with a feast, often sharing food with their neighbors.  In some instances, the feast also offers the young an opportunity to meet, to marry, and to start a new life together.

The Mayflower Pilgrims were no different.  They left England when most were still in their early twenties and, during their twelve-year stay in Leiden, observed a strict church calendar including the call of the seasons and an annual harvest festival.

Only decades before, during the Eighty Years’ War (Dutch War of Independence), Leiden’s independently-minded Protestants died of starvation when the Spanish besieged their city.  The deprivations were still part of living memory when the Pilgrims witnessed the annual thanksgiving services in Leiden.  Today’s traditional hutspot (pot stew) remains a symbolic reminder of this event.  In short, Thanksgiving Day has a long and varied prehistory.

However, I don’t intend to dwell on perennial quarrels, but merely wish to draw a parallel between the Pilgrims from Leiden and a Portuguese viceroy killed at the Cape of Good Hope a decade earlier.

In 1510, when the Cape was still revered as a portal to the Indies, the Viceroy of Portuguese India was led ashore and attacked, then slain and hurriedly buried in a shallow grave.  The murder of Francisco d’Almeida and his sixty compatriots remains a mystery to this day.  Was it the fulfilment of a prophecy or an act of poetic justice?  Was it an ambush, a mutiny or an assassination?

This massacre—called the Battle of Gorinhaiqua and recast as South Africa’s first racial conflict—draws in conspirators, Catholic cabals, conflicts between military orders and, of course, jealousies at court in Lisbon.  So you may ask, where is the parallel?  True, at first glance the Pilgrims’ riverside feast and a beachfront battle below Table Mountain have little in common.

But what if we look deeper?  Like the feast of the Wampanoag, the battle of the Gorinhaiqua has (unwittingly) been miscalculated and misrepresented for five hundred years.  On the one hand American settlers see the feast as symbolizing their union with other nations; whereas Native Americans regard it as a bitter act of betrayal.  Similarly, white Africans and Europeans view the battle as “one of the greatest tragedies in Portuguese history;” whereas, and here comes the historical irony, the indigenes call it “their finest hour in history.”

So what was it then, a triumph or a tragedy, a conquest or a rape?  In short, both events provide parallel interpretations.  I suggest we look at similar parallels in America’s history.

The conquest of America and the Reconquista in Spain are inseparable and follow parallel trajectories.  Had Granada not fallen, Columbus would never have sailed west, not in 1492, nor for Spain.  Probably not for Portugal either.  The siege of Granada—which Columbus himself witnessed—marked the final expulsion of Muslims and Jews from the Iberian Peninsula.  That Columbus contributed to the economic decline of Italy is a matter best suited for another day.

For us now, it’s enough to say that Spain’s newly acquired wealth financed the discovery of the New World.  But without Isabella’s jewels and without outside interference, could Andalusian-Arabs have reached America first?  They had the fleets, the skills and the technology—if not the will.  Imagine a parallel history, and a Muslim America?

While I applaud Martin Luther King’s inclusion in the august company of great Americans—Jefferson, Lincoln and Roosevelt—I find the popularist view of him as the first African-American non-president on the Mall somewhat misleading.  Such continued racial emphasis displaces something that is, speaking of parallels, of greater importance today:  MLK represents all men and women who have initiated reform against formidable odds: whether white, black, Jew or Muslim—even Protestant and Catholic.

MLK strove for reform, like his alter ego Martin Luther in the early 1500s.  While the German theologian initiated the Protestant Reformation against the papacy of Roman Catholicism, this American clergyman led the civil rights movement against the oppression by white Americans.  More than four centuries after Martin Luther’s anti-Jewish statements, MLK appears to have expiated this in his “I Have a Dream” speech on the Mall.  It was as if he marched on Washington to set an old record straight.

If we want to do something for tolerance and integration, then the nearby Holocaust Memorial Museum could honor Martin Luther King, Jr. as a truly “Free Man” and not as an African-American non-president.  Such a symbolic gesture would be a true act of reconciliation.

Like a blind date, first encounters in history are also full of surprises.  Historical events are often so complex that we find different explanations simultaneously. As participants, both white and black, settler or native, our histories are inseparable and bound together like a Gordian knot—as if the same drama had to be re-enacted over and over again.  Furthermore, while American history may seem unfathomable, one swift blow from a sword will not unravel its secrets in a day.  And fortunately so, or Thanksgiving and its parallels in history would become a boring subject indeed.