Is the Western World Declining and Russia Rising?

Walter G. Moss is a professor emeritus of history at Eastern Michigan University a Contributing Editor of HNN. For a list of his recent books and online publications click here. His most recent book is In the Face of Fear: Laughing All the Way to Wisdom(2019), which treats humor from a historical perspective. 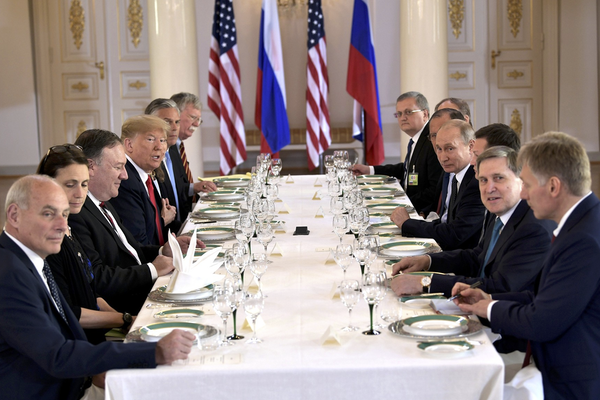 Is the western world declining and Russia rising? Yes, according to Glenn Diesen’s 2018 book The Decay of Western Civilization and Resurgence of Russia (hereafter Decay). Such a conclusion might come as a surprise, but it was a common one among nineteenth-century Russian nationalists. But paraphrasing Mark Twain’s reputed comment about his falsely-reported death, we might say that the report of the Western world decaying—either in the nineteenth century or today—is “greatly exaggerated.”

The main reason that Diesen thinks “the geoeconomic foundations for the West's primacy for the past 500 years is ending” is that it has overemphasized the individual, rational, impersonal, and contractual to the detriment of community, which places more value on the irrational, instinctive, and spiritual.  (“Western civilisation prospered by embracing liberalism and rationalism, yet condemned itself to decay by self-identifying solely by these values.”)  In reaction to this overemphasis, Western right-wing populism has emerged, spurred on by resentment toward globalization and immigration and encouraged by the likes of Donald Trump and France’s Maria Le Pen.

The West’s modern-day ills, according to Decay, also reflect the influence of cultural and political postmodernism, which “produces devastating nihilism by discarding traditional identities, cultures, nations, religions, the family units, genders, and civilisation itself as arbitrary . . . . Tolerance is corrupted by being translated into an embrace of cultural and moral relativism.” Diesen also believes that identity politics has converted the melting-pot ideal into that of the “salad bowl.” Unlike historian Carl Degler, who viewed the latter term favorably because it did not reject diversity and pluralism, he links it with “divisive society,” the politics of “victimhood” and evaluating equality as equal outcome rather than equal opportunity. Emphasizing “responsibilities towards sub-groups” rather than state loyalty “undermines the rule of law, legitimacy of government, and democratic rule.”

Diesen’s criticism of identity politics fails to acknowledge, as Jill Lepore has indicated, that such “politics, by other names, goes all the way back to the founding of the Republic.” And “the identity politics of slaveholders and, later, of the Klan, and of immigration restrictionists, had been the work of more than a century of struggle—for abolition, emancipation, suffrage, and civil rights.” Although some fault might be found with the identity politics of recent decades for diluting “Rooseveltian liberalism” (Lepore’s view),  Diesen’s simplistic critique lacks context and nuance and undervalues the virtues of pluralism.

He goes on to opine that Western decay has sped up since the end of the Cold war. As globalization and new technology “centred on communication, automation, and robotics” has quickened, so too has growing inequality, “loss of civility,” political polarization, immigration, and hostility toward immigrants.

He also believes that Russia is rising, partly because it has “repositioned to the heart of Eurasia,” which has allowed it to reduce its reliance on the West, “while concurrently increasing dependence by others on Russia.” But also because it has balanced economic development with “culture and traditions to address the innate and imperishable in human nature, and to maintain a distinctive identity in a globalising world.”

Although he barely mentions nineteenth-century Russian nationalist thinkers, Diesen’s ideas are similar to theirs in many ways.  Many of them, including Dostoevsky, thought that the West (by which they generally meant Western Europe and the United States) overemphasized rationalism, individualism, and money-making. Conversely, Russia was more religious and appreciative of non-rational elements and a spirit of community.

In the mid-nineteenth century, the historian M. P. Pogodin wrote that the USA was “no state, but a trading company” that “cares solely for profit . . . She will hardly ever bring forth anything great.” In his book Russia and Europe (1869) the botanist Nikolai Danilevsky claimed that European civilization was not the only type of civilization and that there were no universal values, but that different historical-cultural types existed and that Europe and Russia belonged to two very different types. Western Europe, he believed, was decaying and an emerging Slavic civilization led by Russia was the great future hope.

In his Winter Notes on Summer Impressions (1863), Dostoevsky criticized the West for its individualism and materialism. Later, in an 1880 speech he gave on the Russian poet Pushkin, he suggested that Russia might aid the West in helping it to regain a more spiritualistic basis for society.

Diesen states that Russia offers the possibility of doing something similar today. He asks, “Will Western decadence result in completely eviscerating the West as a civilisation . . . or does Russia intend to assist in rejuvenating the traditional and spiritual in the West?” In a December 2013 address President Putin declared that “today, many nations are revising their moral values and ethical norms,” destroying “traditional values,” accepting “without question the equality of good and evil.”

Shortly after this speech, Diesan notes that American conservative Pat Buchanan wrote “Is Putin One of Us?”  Buchanan suggested that in “his stance as a defender of traditional values” Putin is very much in tune with U. S. conservatives.  He added, “Peoples all over the world, claims Putin, are supporting Russia's ‘defense of traditional values’ against a ‘so-called tolerance’ that is ‘genderless and infertile.’ . . . Putin is not wrong in saying that he can speak for much of mankind.” Later, columnist William Pfaff wrote that “the resemblance of President Putin's ambitions for his Russia to those of the neoconservatives in the contemporary United States bear a striking formal resemblance.”

According to Diesen, Russia’s appeal to Western conservative “populists” is its “bold and unapologetic commitment to preserve traditions, national culture, Christian heritage, national identity, and the family structure.” Besides Trump and France’s LePen, the author mentions other leaders, as well as Western parties, who generally share “a remarkable degree of empathy towards Russia and the belief that they have a common cause.” The group includes

the Brexit-advocating UK Independence Party, the Alternative for Germany (AfD) party, and right-wing populist leaders who have come to power in Hungary, Poland, the Czech Republic, and Austria. In a late 2018 interview, Diesan reaffirmed this view of Russia as a defender of traditional values and that “Russia has returned to its pre-communist role as the go-to country for Western classical conservatives.”

Despite some nineteenth-century Russian nationalists’ predictions of Western decline, few people in the western world before World War I (WWI) believed the West was declining. Prior to 1914, nine western European countries controlled over four-fifths of the earth’s lands, and the United States had also expanded the lands it controlled by annexing Puerto Rico, the Philippines, and Guam and making Cuba a protectorate. In his memoir, The World of Yesterday, the Austrian Stefan Zweig wrote of the late-nineteen century widespread belief in progress—e.g., electric lights, telephones, automobiles, improved sanitation and medical treatment, expanded voting, justice, and human rights, reduced poverty, and even the hope for more peace and security.

WWI, however, changed such optimism. Over 15 million Europeans, soldier and civilians, lost their lives in to what many seemed a senseless war. France regained some territory it had lost to Germany in the Franco-Prussian War of 1870-71, but 3 of every 10 Frenchmen between the ages of 18 and 28 paid for the gains with their lives. In addition, the peace treaties that followed the war were unsatisfactory to many, especially in Germany, which helped give rise to Hitler. The mere title of the German Oswald Spengler’s Decline of the West (1918-1922) was just one of many signs that a fundamental change had occurred in Western confidence.

The rise of communism in Russia, with Stalin eventually succeeding Lenin (d. 1924) as the Soviet leader; the rise of Italian fascism in the 1920s; the worldwide Great Depression of the early 1930s; Japanese aggression in Manchuria; and Hitler’s assumption of power in 1933 further sapped confidence in Western progress. Membership in western communist parties increased during the Depression, and not a few Western intellectuals, often fooled by Soviet propaganda, believed that more hope lie in communist Russia than in the capitalist West.

But, as happened before and has happened since, Western decline was only temporary. From 1933 until 1945 President Franklin Roosevelt (FDR) brought the United States out of the Depression and led a coalition of powers that defeated Germany, Japan, and other nations. In 1955, one of the twentieth-centuries most astute political philosophers, Britain’s Isaiah Berlin, had this to say about the 1930s:  “The most insistent propaganda in those days declared that humanitarianism and liberalism and democratic forces were played out, and that the choice now lay between two bleak extremes, Communism and Fascism . . . .The only light that was left in the darkness was the administration of Roosevelt and the New Deal in the United States. At a time of weakness and mounting despair in the democratic world Roosevelt radiated confidence and strength.. . . Mr. Roosevelt’s example strengthened democracy everywhere.”

Contrasting today with late 1932, when Depression gloom was at its height, it is difficult to believe the Western world is now in worst shape than back then. Is a Russia led by an opportunistic Vladimir Putin, allied with conservatives who have groveled to the likes of Donald Trump, really one of the world’s greatest future hopes? Can the West still not produce leaders of FDR’s caliber? Can it still not reinvigorate values that once helped make it great like freedom, democracy, equality, social justice, and tolerance?

History has demonstrated enough zigs and zags, stops and starts, setbacks and advances for anyone assuredly to predict the future. The nineteenth-century Russian exile Alexander Herzen was closer to the truth than Danilevsky, Spengler, Diesen, and others who thought they could foresee the future. In an essay on the Utopian socialist Robert Owen, Herzen wrote that “nature and history are . . . ready to go anywhere they are directed,” and “having neither program, nor set theme, nor unavoidable denouement, the disheveled improvisation of history is ready to go along with anyone. . . . A multitude of possibilities, episodes, discoveries in history and nature, lies slumbering at every step.”