A Coup of "Clerqs"?: Anne Applebaum's "Twilight of Democracy" Reviewed 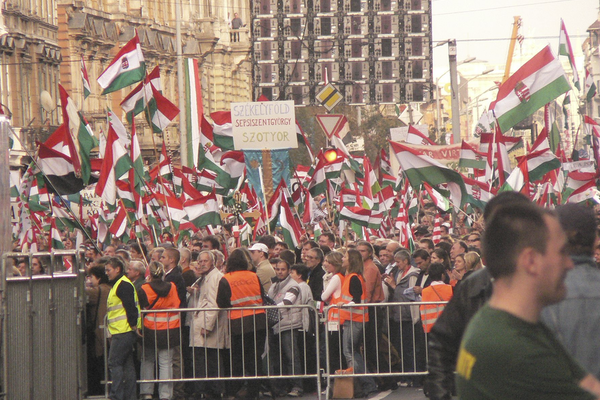 On New Year’s Eve in 1999, historian and journalist Anne Applebaum and her husband Radek Sikorski, who was then Poland’s deputy foreign minister, hosted what sounded like a really great party. Their home was filled with American and British journalists, Polish dignitaries, and some of their neighbors. Applebaum characterizes them as representatives of “the right,” which at the time meant something vastly different from what it means today. They were staunch anti-communists in the Thatcherite tradition, who were optimistic about Poland’s embrace of democracy and free markets. The gathering was held at an old manor house that had been abandoned in 1945 by its previous owners, who had fled from the advancing Red Army. Sikorski’s family had purchased and renovated the dilapidated house, making it the perfect metaphor for a nation rising from decades of oppression at the hands of the Soviet Union. Unfortunately, the friendships and the optimism that animated that celebration have largely evaporated. According to Applebaum, “Nearly two decades later, I would now cross the street to avoid some of the people who were at my New Year’s Eve party. They, in turn, would not only refuse to enter my house, they would be embarrassed to admit they had ever been there.”  Many of her Polish friends, colleagues, and acquaintances have abandoned their belief in classical liberalism and embraced an illiberal right-wing authoritarianism that sees democracy as flawed and free markets as rigged by elites. She maintains that the bitter political divisions that developed among those who attended this party in Poland are similar to those now found in many countries today, including Hungary, Spain, Italy, Great Britain and the United States.

In Twilight of Democracy: The Seductive Lure of Authoritarianism, Applebaum identifies several factors that have contributed to the rise of twenty-first-century illiberal movements, often using personal anecdotes to illustrate her points. She is not particularly concerned with theories, nor is she attempting to offer a grand thesis about the phenomenon. She makes a few passing references to the ideas of Hannah Arendt and Theodor Adorno among others, and relies on the work of a behavioral economist, Karen Stenner, to point out that about a third of the world’s population simply has an authoritarian disposition that makes them deeply suspicious of views different from their own. The bulk of her analysis focuses on the journalists, propagandists, intellectuals, and opportunists who support and enable authoritarian leaders. She refers to these sycophants as clerqs—a term she borrows from Julien Benda’s 1927 book, The Treason of the Intellectuals—and explores their ideas (such as they are) and methods. She provides dozens of examples of how these clerqs used the system to advance themselves and perpetuate the system but devotes little attention to the actions of dictators like Viktor Orban, Andrzej Duda, and Vladimir Putin. It is an interesting approach to the phenomenon of rising authoritarianism.

Twilight consists of six chapters, three of which have already appeared in the Atlantic or Washington Post. Each chapter can be read independently, but they fit together well in book form. Some readers may be disappointed that she devotes little attention to left-wing authoritarianism arguably found in some political parties, among college activists, and in cultural institutions, but she chose to focus on right-wing authoritarianism because she sees it as the greater threat to Western democratic liberalism right now. Poland and Hungary serve as her two most important examples of authoritarians using democratic institutions to gain power, but she refers to Russia, Turkey and other nations as well. The book is a powerful warning to citizens of democracies around the world: “Given the right conditions, any society can turn against democracy. Indeed, if history is anything to go by, all of our societies eventually will.”

Applebaum’s exploration of the demise of Polish and Hungarian liberalism illuminates key developments that are also found in other European countries and the US. She asserts that today’s authoritarians essentially follow Vladimir Lenin’s view of political parties, but neither Law and Justice in Poland nor Fidesz in Hungary seized power through violent revolution. However, these modern authoritarians embrace the Leninist model of a polity ruled by a single party. Though the veneer of a pluralistic democracy endures, the party dominates many aspects of life in both countries. The clerqs who support the party and run the government, “…understand their role, which is to defend the leaders, however dishonest their statements, however great their corruption, and however disastrous their impact on ordinary people and institutions. In exchange, they know that they will be rewarded and advanced.”  For example, she tells the story of Jacek Kurski, who rose from “relative obscurity of fringe politics,” (he was known for his work spreading the rumor that Polish presidential candidate Donald Tusk had a grandfather who voluntarily fought with the Wehrmacht in World War II) to become the director of Telewizja Polska, Poland’s public broadcaster. Since he took control of the broadcasting company, it has become a mere propaganda outlet for Law and Justice. Applebaum describes his appointment as akin to Alex Jones of InfoWars taking over the BBC. Law and Justice and Fidesz have not resorted to the creation of a new Gulag to suppress dissent; they rule through intimidation, manipulation of the media, and control of the courts.

These new authoritarians do not try to promote what anti-Stalinist writers like Arthur Koestler and George Orwell called the Big Lie. Instead, they promote the Medium-Size Lie, a term coined by historian Timothy Snyder. Law and Justice promotes many such lies wrapped up in vast conspiracy theories. One example is the Smolensk conspiracy concerning the 2010 plane crash that killed the Polish president, Lech Kaczynski, who was on his way to Smolensk for a ceremony commemorating the thousands of the Polish officers murdered in 1940 by the Red Army. Since the truth of the official investigation into the causes of the crash embarrassed Law and Justice (the black box revealed that Kaczynski himself insisted that they land the plane despite a thick fog), the party concocted an elaborate and flexible theory that the plane was brought down by various conspirators, though the group and its goals can change on an as-needed basis. According to the author: “Anyone who professes belief in the Smolensk lie is by definition of true patriot—and thus qualified for a government job.”  (I was surprised the author did not connect this lie to the Polish Communist Party’s insistence that the Katyn Forest Massacre was the work of the Nazis, not the Red Army.) Fidesz dusts off old anti-Semitic tropes to frighten Hungarians into believing that Viktor Orban is the great bulwark against George Soros’s sordid attempt to destroy Christian civilization by enabling mass immigration of Muslim refugees into Christian Hungary.

Illiberal political movements in Europe and the United States use conspiracy theories to promote what the author calls “restorative nostalgia.”  They contend that their once-great nations have been weakened by a whole host of similar threats that have specific variations depending on the country. The Vox party in Spain claims that Muslim invaders are poised to undo the fifteenth-century Reconquista of Catholic Spain. Prior to winning office Boris Johnson, in his columns for the Daily Telegraph, painted an often-inaccurate picture of venal and corrupt European Union bureaucrats destroying the fabric of English society. In a BBC interview, Johnson candidly admitted, “...everything I wrote from Brussels was having this amazing, explosive effect on the Tory party—and it really gave me this, I suppose, rather weird sense of power.”  In Poland, the LGBTQ community is seen as an existential threat to the nation. And some members of the Republican Party in the US, including President Donald Trump, have lent credence, if not active support, to the bizarre QAnon conspiracy of deep state actors destroying the country, maintaining that only Trump can Make America Great Again.

These movements share similar enemies and tactics, sometimes relying on the same viral memes that can instantly transcend borders. For example, a video purporting to show a large group of French Muslims in Paris celebrating the 2019 fire in Notre Dame Cathedral was shown across multiple platforms on both sides of the Atlantic as a dire warning of the threat of Muslim immigrants. In reality, the images were from an anti-government rally in Algeria held before the tragic fire. Amidst the “cascade of lies,” the truth has little chance of catching up. What’s worse, even if the truth catches up, it is too easy to ignore because of the sheer volume of information spread across the internet.

Applebaum illustrates her points with numerous personal experiences that she shared with leading European and American journalists, writers, artists, and politicians, which make the book both compelling and enjoyable to read. Twilight of Democracy raises alarms that liberal democracy is facing its most significant threat since the Cold War. She does not, however, insist that it’s doomed. In the final chapter, she recounts another party she hosted in 2019 (she seems to have a great social life), which included large numbers of guests including her teenage sons’ friends from Poland, Britain, and the US: “They mixed English and Polish, danced to the same music, knew the same songs. No deep cultural difference, no profound civilizational clashes, no unbridgeable identity gaps appeared to divide them.”  The threat of authoritarianism is not going away, but liberal democracy can still prevail.