The Shine is off the City on the Hill: American Democracy Seen From Abroad 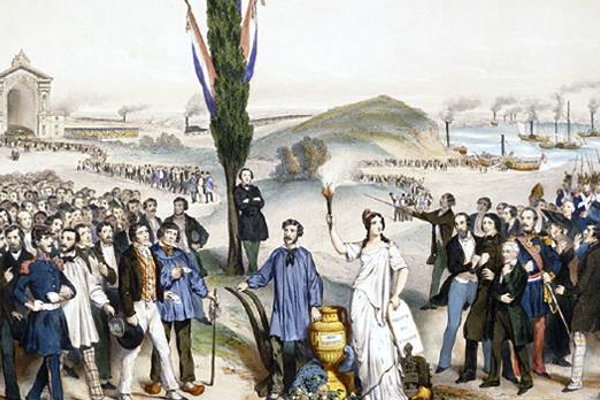 “What is going on in Georgia? We have been waiting for hours. This is ridiculous. This is unfair.” These were the words of 80-year-old Anita Heard on June 9 at 9:45am, after having waited since 6am to cast her ballot in the Georgia primary election. As the day unfolded, the news of issues with voting machines, long lines, and concerns over voter suppression increased.

This was certainly not the first time in Governor Brian Kemp’s Georgia that voters faced a barrier. As the sitting Secretary of State overseeing the election, he ran for governor in 2018, eliminating tens of thousands of people from the ballot rolls, and winning by a margin that was close to the number of individuals eliminated. His successor in office, Brad Raffensperger, did his own damage by eliminating polling locations in predominantly African American parts of rural Southwest Georgia. The news of Georgia’s democratic failures and those in many other parts of the country have added to questions about U.S. democracy and have caused much ridicule around the world.

My first memory of the U.S. electoral system was in 2000, watching ballot inspectors in Florida holding up butterfly ballots to see if the vote had been for George W. Bush or Al Gore. The whole system--scantron based voting, electric machines, having to drive 10 minutes to a voting precinct when you reside 5 from another—was completely alien. Having voted a number of times in my native Germany, I was used to a simple paper ballot, with fraud something almost completely unheard of. Yet despite the fact that the United States has historically styled itself as the world’s leading democracy, history illustrates that it has never practiced the same democracy as it has preached. U.S. democracy has been a fraud for a long time.

On November 6, 2003, months after having declared “Mission Accomplished” in the Iraq War of 2003, George W. Bush declared

Our commitment to democracy is also tested in the Middle East, which is my focus today, and must be a focus of American policy for decades to come. In many nations of the Middle East — countries of great strategic importance — democracy has not yet taken root.

Thus, publicly at least, the goal of the 2003 invasion of Iraq and the regime change was to foster democratic government in the Middle East.

Bush’s pledge to bring freedom and democracy to the Middle East came a century after President Woodrow Wilson, another wartime president, had set an even more ambitious task for the United States. In his War Message to Congress on April 2, 1917, Wilson outlined why the country had to go to war with imperial Germany, noting: “the world must be made safe for democracy. Its peace must be planted upon the tested foundations of political liberty. We have no selfish ends to serve. We desire no conquest, no dominion.”

Wilson’s words in 1917 rang just as hollow as Bush’s would a century in the future. In 2013, the conservative majority on the Supreme Court gutted the Voting Rights Act in Shelby County v. Holder, ending the federal preclearance requirement for changes to voting laws and requirements. The ruling opened the door to a wide range of laws infringing on voting rights, disproportionately hurting minorities and people of color.

Similarly, in 1917, there was a disparity between Wilson’s claims and reality. In 1871, when Otto von Bismarck united the new German Empire from the 36 German states, the new Reichstag (equivalent to the U.S. House of Representatives) was elected by universal manhood suffrage. While all men in Kaiser Wilhelm II’s German had the right to vote, in Wilson’s United States, only white men had the right to vote. African American men were excluded by a variety of legal restrictions ranging from poll taxes to literacy tests, but also excluded were many Native Americans and Chinese Americans, not considered citizens at the time. How could a country that allowed fewer men, not to mention women, the right to vote claim it was better than the German Empire? The perception of an exceptional status in the world, superior to the monarchies of Europe, had contributed to a lofty perception in the United States about its democratic system of government.

The United States has engaged in a long tussle with the question of democratizing the country. When James Madison, Alexander Hamilton, and John Jay tried to convince New Yorkers about the benefits of the new Constitution with the Federalist Papers, they worried about granting too much power to the people and thus likely unleashing a mob. Madison’s concern, expressed in Federalist 10, was that “men of factious tempers, of local prejudices, or of sinister designs, may, by intrigue, by corruption, or by other means, first obtain the suffrages, and then betray the interests, of the people.” Today we may well ask if  a nefarious and corrupt group has usurped power and betrayed the interests of the people by undermining their ability to vote.

The Early Republic limited the participation of the people with states imposing property qualifications on voters. Thus initially, the United States was not a democracy at all. However, the election of Thomas Jefferson in 1800 brought about an extension of democracy, more officials were directly elected by the people, some states allowed the people to vote for electors instead of state legislatures, and some states even abandoned property qualifications. Nevertheless, it was not until the election of Andrew Jackson in 1828 that democracy reached its early zenith. All states except for South Carolina involved the people in the selection of the presidential electors and removed the property qualifications from voting. On paper, the United States was the most democratic country by the mid-nineteenth century.

There were problems however. In the southern parts of the country, aristocratic-minded planter elites had a stranglehold on political power. Even while they permitted democratic elections, their outlook called for anti-majoritarian rule. Rebel president Jefferson Davis reminded his people in 1862 that the “tyranny of an unbridled majority” was “the most odious and least responsible form of despotism.” However, these clear anti-democratic statements were not the most visible signs that especially foreigners picked up on. Rather, it was the violence, corruption, and utter chaos associated with U.S. democracy that made the system such a cautionary tale.

The image of voting, such as in Baltimore where corruption, voter suppression, and electoral manipulation ran rampant, was one of democracy run amok. It was common practice that rival political gangs fought each other for access to polling places on election day. They would stuff the ballot boxes with tickets of their preferred candidate or remove those supporting the opposition candidate. Sometimes, political groups placed polling placed in proximity to their political clubs, thus controlling the voting. There were lookouts to spot opposing gangs infringing on territory. It was a spectacle in chaos and corruption, which highlights the long history of indifference toward the democratic process and acceptance of political violence at the poll in the United States. While today political parties tend to avoid ballot box stuffing, leaving aside the recent fraud incident in North Carolina, the call by the president for armed poll watchers evokes a threat of violence similar to what the country witnessed in the past and something that is clearly designed to undermine the democratic process.

By 1848, when many European countries experienced revolutions that brought about constitutional governments and in some cases even abandoned monarchy, observers in the United States hoped Europe was finally ready to mimic the United States and its republican institutions. In Frankfurt, where the German parliament tried to craft a new constitution, the United States was seen as both a possible example for a German republic and the example to avoid. The presiding official, Heinrich Freiherr von Gagern worried that the German people were not ready for democracy.

In Great Britain, which had enlarged the franchise in the past to fend off revolution, the 1850s witnessed a number of debates over further enfranchisement. However, in those debates, a common fear emerged regarding democracy, best illustrated in the 1854 debate when William Molesworth, MP of Southwark, observed that democracy would likely allow an “ignorant and violent mob” to take over government. In the course of the debates, when Members of Parliament referenced the United States they mentioned the excesses of democracy and corruption. In 1866, Matthew Marsh, MP of Salisbury, noted that “democracy had been favourable to human freedom or progress.” However, when he looked to the United States, all he saw was high protective tariffs and restrictive social legislation, such as liquor laws. Thus, the United States was more a symbol of how not to do democracy.

Ironically, while Bismarck’s Germany and the French Third Republic of 1871 adopted universal manhood suffrage, and the British constitutional monarchy moved toward universal manhood suffrage during the nineteenth century, in the United States, more and more laws passed to obstruct the exercise of the right to vote, not only by African-Americans but also among immigrant populations.

The criticism of American hypocrisy about democracy was perhaps most forcefully expressed after World War II, when African colonies gained their independence. While the country tried to paint the Soviet Union as the enemy to world peace, many Africans and new African states were indignant at the United States’s promotion of capitalist and democratic values in Africa while allow the lynching of African-Americans at home, denying African Americans voting and civil rights, and segregating people based on skin color. It was in part Cold War propaganda pressures that forced the federal government to intervene in Little Rock and ultimately pass the Civil Rights and Voting Rights Acts of 1964 and 1965.

At the end, one is left wondering if it is time to treat the United States as the failed state some have suggested it is in light of its dismal reaction to COVID-19 and bring in United Nations electoral observers to ensure the democratic process is properly observed.