The Unique Struggles of Women and Native Americans to Vote

Thom Hartmann is a progressive national and internationally syndicated talk show host. Talkers magazine named him America's most important progressive host and has named his show one of the top ten talk radio shows in the country every year for over a decade. A four-time recipient of the Project Censored Award, Hartmann is also a New York Times bestselling author of twenty-six books, translated into multiple languages. 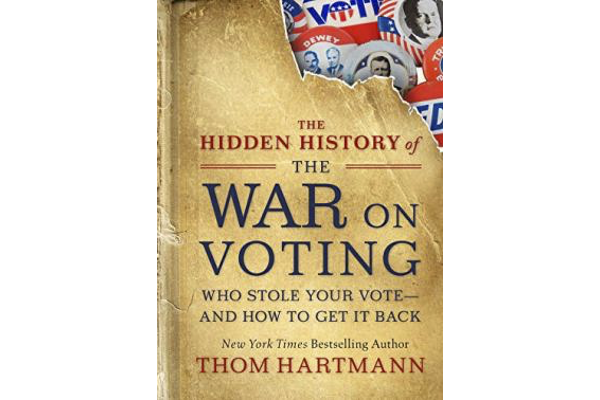 Wealthy white men have had the right to vote in America since the beginning of our republic. It’s been a very, very different story for women and Native Americans.

The struggle for women’s voting rights began in April 1776, when 32-year-old Abigail Adams sat at her writing table in her home in Braintree, Massachusetts, a small town a few hours’ ride south of Boston.

The Revolutionary War had been going on for about a year. A small group of the colonists gathered in Philadelphia to edit Thomas Jefferson’s Declaration of Independence for the new nation they were certain was about to be born, and Abigail’s husband, John Adams, was among the men editing that document.

Abigail had a specific concern. With pen in hand, she carefully considered her words. Assuring her husband of her love and concern for his well-being, she then shifted to the topic of the documents being drafted, asking John to be sure to “remember the Ladies, and be more generous and favourable to them than [were their] ancestors.”

Abigail knew that the men drafting the Declaration and other documents leading to a new republic would explicitly define and extol the rights of men (including the right to vote) but not of women. She and several other well-bred women were lobbying for the Constitution to refer instead to persons, people, humans, or “men and women.”

Her words are well preserved, and her husband later became president of the United States, so her story is better known than those of most of her peers.

By late April, Abigail had received a response from John, but it wasn’t what she was hoping it would be. “Depend on it,” the future president wrote to his wife, “[that we] know better than to repeal our Masculine systems.”

Furious, Abigail wrote back to her husband, saying, “If perticular [sic] care and attention is not paid to the Ladies, we are determined to foment a Rebellion.”

Adams, Jefferson, Hamilton, and the other men of the assembly wrote, “We hold these truths to be self-evident, that all men are created equal, that they are endowed by their Creator with certain unalienable Rights, that among these are Life, Liberty and the Pursuit of Happiness. That to secure these rights, Governments are instituted among Men, deriving their just Powers from the Consent of the Governed . . . ”

The men had won.

At that time, a married woman couldn’t make out a will because she couldn’t independently own property. Her husband owned anything she’d brought into the marriage. If he died, a man appointed by a court would decide which third of her husband’s estate she could have and how she could use it, and he would supervise her for the rest of her life or until she remarried. A woman couldn’t even sue in court, except using the same laws applied to children and the mentally disabled with a male executor in charge.

And, for sure, a woman couldn’t vote.

The Generational Fight for Women’s Suffrage

Nearly a hundred years later, things hadn’t changed much. Susan B. Anthony went to her ward’s polling station in Rochester, New York, on November 1, 1872, and cast a vote.

Justifying her vote on the grounds of the 14th Amendment, Anthony wrote, “All persons are citizens—and no state shall deny or abridge the citizen rights.”

Six days later, she was arrested for illegally voting. The judge, noting that she was female, refused to allow her to testify, dismissed the jury, and found her guilty.

A year later, in the 1873 Bradwell v. State of Illinois decision, concerning the attempt of a woman named Myra Bradwell to practice law in Illinois, the US Supreme Court ruled that women were not entitled to the full protection of persons for purposes of voting or even to work outside the home.

Justice Joseph P. Bradley wrote the Court’s concurring opinion, which minced no words: “The family institution is repugnant to the idea of a woman adopting a distinct and independent career from that of her husband. So firmly fixed was this sentiment in the founders of the common law that it became a maxim of that system of jurisprudence that a woman had no legal existence separate from her husband, who was regarded as her head and representative in the social state.”

After another 50 years, suffragettes eventually won the right to vote with the passage of the 19th Amendment in 1920. But burdensome laws, written and passed mostly by men, continue to oppress women to this day. These include voter suppression laws that hit women particularly hard in Republican-controlled states.

Those states, specifically, are the places where “exact match” and similar ALEC-type laws have been passed forbidding people to vote if their voter registration, ID, or birth certificate is off by even a comma, period, or single letter. The impact, particularly on married women, has been clear and measurable. As the National Organization for Women (NOW) details in a report on how Republican voter suppression efforts harm women:

Voter ID laws have a disproportionately negative effect on women. According to the Brennan Center for Justice, one third of all women have citizenship documents that do not identically match their current names primarily because of name changes at marriage. Roughly 90 percent of women who marry adopt their husband’s last name. That means that roughly 90 percent of married female voters have a different name on their ID than the one on their birth certificate. An estimated 34 percent of women could be turned away from the polls unless they have precisely the right documents.

MSNBC reported in a 2013 article titled “The War on Voting Is a War on Women, “[W]omen are among those most affected by voter ID laws. In one survey, [only] 66 percent of women voters had an ID that reflected their current name, according to the Brennan Center. The other 34 percent of women would have to present both a birth certificate and proof of marriage, divorce, or name change in order to vote, a task that is particularly onerous for elderly women and costly for poor women who may have to pay to access these records.” The article added that women make up the majority of student, elderly, and minority voters, according to the US Census Bureau. In every category, the GOP wins when women can’t vote.

Republicans generally are no more happy about Native Americans voting than they are about other racial minorities or women. Although Native Americans were given US citizenship in 1924 by the Indian Citizenship Act, that law did not grant them the right to vote, and their ability to vote was zealously suppressed by most states, particularly those like North Dakota, where they made up a significant share of the nonwhite population.

Congress extended the right to vote to Native Americans in 1965 with the Voting Rights Act, so states looked for other ways to suppress their vote or its impact. Gerrymandering was at the top of the list, rendering their vote irrelevant. But in the 2018 election, North Dakota took it a step further.

Most people who live on the North Dakota reservations don’t have separate street addresses, as most tribes never adopted the custom of naming streets and numbering homes. Instead, people get their mail at the local post office, meaning that everybody pretty much has the same GPO address. Thus, over the loud objections of Democratic lawmakers, the Republicans who control that state’s legislature passed a law requiring every voter to have his or her own unique and specific address on his or her ID.

Lots of Native Americans had a driver’s license or even a passport, but very few had a unique street address. When the tribes protested to the US Supreme Court just weeks before the election, the conservatives on the Court sided with the state.

In South Dakota, on the Pine Ridge Reservation, the Republican-controlled state put polling places where, on average, a Native American would have to travel twice as far as a white resident of the state to vote. And because that state’s ID laws don’t accept tribal ID as sufficient to vote, even casting an absentee ballot is difficult.

Although the National Voter Registration Act of 1993, also known as the Motor Voter Act, explicitly says that voting is a right of all US citizens, that part of that law has never been reviewed by the Supreme Court and thus is largely ignored by most GOP-controlled states. As a result, you must prove your innocence of attempted voting fraud instead of the state proving your guilt.

Reprinted from The Hidden History of the War on Voting with the permission of Berrett-Koehler Publishers. Copyright © 2020 by Thom Hartmann.