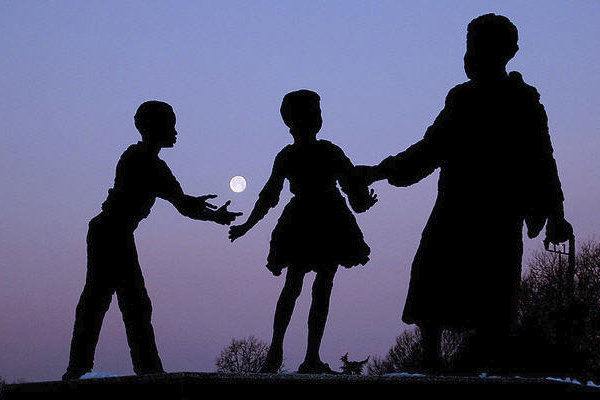 In recent weeks a debate has erupted about the future of the Emancipation Memorial – or Freedmen’s Memorial – in Lincoln Park in Washington D.C. Critics say the statue, which shows Lincoln standing over the figure of a crouching Black man, is racist and should be removed. Its defenders point out that the monument was requested and paid for by newly freed Black Americans. In all the discussions about the statue’s fate the presence of another memorial, significant for a number of firsts, is often forgotten: the Bethune Memorial, which honors the life and legacy of civil rights activist, presidential advisor and educator Mary McLeod Bethune. This statue has the potential to deepen our understanding of Lincoln Park as a commemorative space.

The figure of Frederick Douglass is frequently invoked in the current debates about the Emancipation Memorial. He spoke at the dedication in 1876 and is long understood to have misgivings about Thomas Ball’s design. A newly resurfaced letter shows that Douglass suggested another statue be erected alongside it. “There is room in Lincoln park for another monument,” he wrote. The historians who made this discovery, Professors Scott A. Sandage and Jonathan W. White, rightly point out that Lincoln Park got another statue – the Bethune Memorial. They suggest, however, that the later statue doesn’t fulfill Douglass’s suggestion because the memorials aren’t in dialogue. But research suggests that these two statues do ‘speak’ to one another and that this was the very intention of the creators of the Bethune Memorial.

When the statue of Mary McLeod Bethune was dedicated in the summer of 1974, it was the first monument to an African American or to a woman of any race on federal land in the capital. It marked the culmination of almost two decades of lobbying and fundraising by the National Council of Negro Women, the organization she founded. Designed by Robert Berks, it shows Bethune holding out a scroll – her legacy – to two African American children at her side. Given that statues tend to commemorate the powerful at the behest of the powerful – in other words, white men – the achievements of the NCNW are remarkable. This was a memorial to a Black woman, created by Black women. Unlike Charlotte Scott, who gave her first five dollars earned in freedom to the Emancipation Memorial, the women of the NCNW contributed to the design and meaning of their memorial. With the help of figures such as Shirley Chisholm, they secured Congressional approval and they raised $400,000, a not insignificant sum, given the context of the times and the other demands on people’s check books. It took fourteen years to raise the funds through donors, fundraising events, and sponsors.

The NCNW claimed Lincoln Park was chosen because it was already an important site of Black commemoration. Its new monument was “inspired by the memorial that is already here.” As part of the redesign of the park in anticipation of Bethune’s arrival, Lincoln was turned to face her. NCNW President Dorothy Height joked it was so “his back will not be to our gracious lady”. The NCNW explained he was repositioned “to convey the message that the children of slaves had progressed from servitude.”  It made much of ‘Mother’ Bethune’s story as the “daughter of slaves.” Her life was evidence of the “progress” of the race after freedom. But interestingly her statue echoes Lincoln, not the freedman. She has a similar stance, with her arms outstretched. This is deliberate. The NCNW made frequent comparisons between the two figures. At the unveiling ceremony, on July 10, 1974, the actor Roscoe Lee Brown read extracts from the speech Frederick Douglass made at the Emancipation Memorial almost 100 years earlier. In Brown’s reading, ‘Lincoln’ was changed to ‘Bethune.’

There are a number of reasons the NCNW wanted its monument to be presented in dialogue with the Emancipation Memorial. Some of these were pragmatic – it elevated Bethune’s legacy and helped portray her as a universal, unifying figure. Others were symbolic, representing an inclusion of Black women’s stories into the nation’s history. Height and her organization believed that the appearance of their memorial transformed the story being told in Lincoln Park. Height reflected, “This park has a different context now. It’s no longer just Lincoln and a slave.”

As part of the memorial project, Lincoln Park was redesigned and landscaped. It had been falling into disrepair and was transformed back into a neighborhood space to be used by the local community. The NCWN wanted residents to engage with the statue and saw it as a place to “remember the struggle of Black Americans and the leadership and contribution of Black Women in that struggle.” Every year the National Park Service, now responsible for the monument, organizes a ceremony on Bethune’s birthday and the anniversary of the memorial’s dedication. But a 2009 report by the NPS found that the reconstruction of the park had altered the relationship between the memorial site and the recreational park, finding a “separation” between the areas. Ironically, the current situation may have transformed Lincoln Park back into the space for dialogue desired by the NCNW. Protestors, locals and others have been exchanging opinions about the future of the space.

Discussions about the fate of the Emancipation Memorial need to recognize that it does not stand alone. Since the 1970s, it has not just been Lincoln and a slave. A Black woman, with a remarkable and inspiring story, faces them. Her inclusive gesture reaches out towards them.

The Bethune Memorial was probably not what Douglass had in mind when he called for a statue which represented the African American “erect on his feet like a man.” Perhaps he could not conceive of a representation of freedom which wasn’t masculine. The Black women of the National Council of Negro Women could and did. The statue they created offers, in part, a corrective to the lack of Black agency in the earlier monument. Does it mean that the Freedmen’s Memorial should not be read as a racist portrayal of white domination? No. Does it mean that protestors are wrong in calling for its removal? No. This is something that should be decided by the Black residents of D.C. who must live alongside this statue. But the Bethune Memorial might suggest ways in which commemorative spaces can operate as places of dialogue. And the story of the NCNW’s creation of its memorial is every bit as important and remarkable as that of the formerly enslaved who funded the Emancipation memorial. It too should be told, and ‘Mother’ Bethune must not be forgotten.