Professor at the Ecole normale supérieure at Paris-Saclay, Olivier Wieviorka  is mostly interested in WWII history. His main books have been translated in American: Orphans of the Republic, Harvard UP, 2009, Normandy. The landings to the Liberation of Paris, The Belknap Press of Harvard UP, 2008-, Divided Memory : French Recollection of World War II from the Liberation to the Present, Stanford UP, 2012, The French Resistance, The Belknap Press of Harvard University Press, 2016. 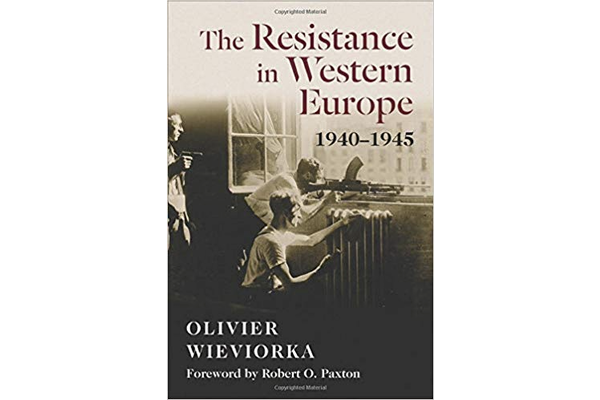 While national histories of wartime resistance are plentiful, the European dimension of the shadow army has rarely been taken into account. Doing so makes it possible to write a comparative history that considers resistance as a global phenomenon, minimizing national frames and underlining the interrelations between groups, institutions and organizations of the countries concerned.

The Resistance in Western Europe (Columbia UP, 2019)  aims to do exactly that for World War II resistance activities in Occupied Western Europe. Drawing on the materials from  the National Archives (Kew, UK) andthe National Archives and Records Administration (College Park, MD), it explains how the Anglo-Americans attempted, between 1940 and 1945, to support the underground forces in Western Europe. Until 1943, The US, however, played a limited part. Their secret services, the Office of Strategic Services (OSS) was young (it had been created in June 1942) and they mainly relied upon British expertise. They were not popular, as the anti New Dealers suspected them to reinforce the State and to give Roosevelt dangerous powers. The burden, to sum up, was mainly carried on by London.

Six Western European countries--Norway, Denmark, Netherlands, Belgium, France and Italy—were chosen. They were very different. Norway had a regular government in exile while Italy, for example, fought on the Axis side. But in all these six countries, the Anglo-Americans tried to strengthen the Resistance movements, hoping, in the Italian case, that they could overthrow Mussolini. I hence argue that almost as soon as the war began the British considered internal resistance in the occupied countries of Western Europe an essential part of their strategy.

British Prime Minister Winston Churchill knew that his nation’s ground forces, gutted in 1940, would not return to the old continent any time soon. The British Navy and the Air Force could play a role, but only in the medium term.That left the resistance which he hoped would yield promising dividends.

To structure and root the army of the shadows, the British relied on had three means of action which historians of the period often discuss separately: propaganda; the efforts of their own secret services to help the resisters; and recognition from the governments in exile. In fact, they worked in tandem. Propaganda, for example, encouraged people to rise up, special services armed and directed the crowds; while support from an exiled power helped legitimize the revolt – and vice versa. The Danish resistance, for example, suffered for a long time from the implicit support given by the Foreign Office to Christian IX. For if Denmark supported the Nazi war effort, particularly through its agriculture, the King never fell into the shameless collaboration of the Vichy regime.

Convinced that the oppressed peoples would soon revolt on their own, the British believed the Special Operations Executive (SOE), a Secret Service devoted to Action (and not to collect intelligence) could just stoke the flame. They reckoned without the Nazis who quickly and violently squelched any sign of rebellion. Following two failed rebellions in 1941, the Dutch opposition to the Nazis’ anti-Semitic policy and the French miners’ strike, the British adopted a more modest strategy for the general populace of work slowdowns and the avoidance fraternization with the enemy. At the same time, they encouraged those in resistance units to act which they did before and after D-Day in 1944. The British General Staffs, however, refused a widespread uprising which would end in a bloodbath.

Even as they encouraged resistance abroad, Allied proponents of resistance faced resistance from their own people. In the US and the UK, the military hierarchy did not believe in subversive warfare. Airmen preferred strategic bombardment rather than allotting aircraft to drop containers of ammunitions and radio operators. Governments in exile were sometimes uncooperative: either they jealously guarded their sovereignty, as CharlesDe Gaulle did, or they refused, as the Belgians did, to let SOE engage insabotage which could lead to severe reprisals. Relations between the British and the Americans were also complicated. The Americans began to suspect the British to act in an unfiredly way from 1943 onwards. In the French case, they, for example, claimed to help the Resistance but said nothing about the American help. This attitude could endanger the American-French relations after the war, a datum which lead the American staff to increase their own dorrping of weapons in 1944.

These obstacles, however, were gradually eliminated. By 1943, the resistance was playinga role in military operations. In Italy, Partisans fixed six German divisions in the North. In Belgium, the resistance, supported by the British London, helped 30,000-50,000 draft dodgers to escape compulsory labor. In France, the resistance hindered the transport of reinforcements to Normandy after D-Day.

Despite their successes, the resistance had many failures. In France, for example, de Gaulle had supported thepowerful maquis, hoping the French couldfree some parts of their territory without Allied assistance. But the resistance-only battles of Vercors, Mont-Mouchet, and Saint-Marcel ended in bloodbaths.The success of the Paris uprising was largely due to French and American regular troops.

As the war neared its end, the Anglo-Americans feared the secret armies they had supported---and in some cases had created---would create political disorder. The Communists could launch a revolution; resistance groups could oppose governments in exile or a civil war would break out between resisters and collaborators.None of these fears became reality. In fact, Stalin was not anxious to launch a revolution in Western Europe. He therefore encouraged the Communists to play the game of national unity. According to him, victory on Germany prevailed. And many resisters, even if they were reluctant toward the Old Parties were not ready to begin a civil war to impose violently their dreams. While they made mistakes by maintaining traditional but discredited powers such asor King Victor Emmanuel in Italy, the Allies bridged the gap between resistance groups and their governments.In Italy, for example, the Allied signed in December 1944 an agreement with the resisters who were still under the German yoke. Their representatives, the Comititato di Liberazione Nazionale Alta Italia (CNLAI) would recognizethe Roman Government; but the Government in exchange was considered as the legal representative of the Government in the North. The Italian Government agreed with this formula and signed an agreement with the CNLA on 26 December 1944.

Clearly the Anglo-American support for resistance in Western Europe wasessential to the Allies’ victory. Yet this contribution has been forgotten or discussed in a piecemeal fashion. "Memories were short and the French would very soon forget what had been done for them and might be more inclined to remember things that had not been done,” sadly noted the British Embassy in Parisin June 1945. They were perfectly right. But history has now to prevail on memory.