In 1844, Nativist Protestants Burned Churches in the Name of Religious Liberty

Zachary M. Schrag is Professor of History at George Mason University and the author of the forthcoming books The Princeton Guide to Historical Research (Princeton University Press) and The Fires of Philadelphia: Citizen-Soldiers, Nativists, and the 1844 Riots Over the Soul of a Nation (Pegasus Books). 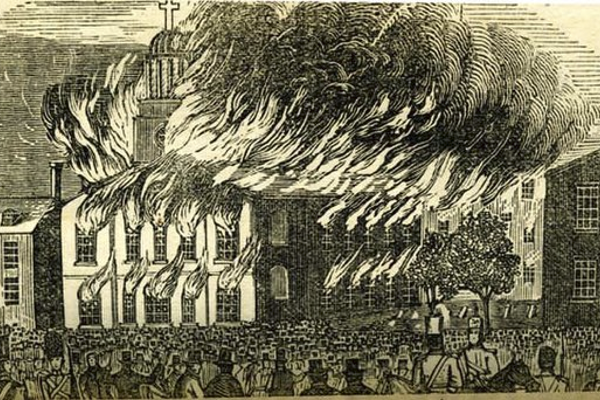 A mob burns St. Augustine's Catholic Church in Philadelphia, 1844, from John B. Perry A Full and Complete Account of the Late Awful Riots in Philadelphia

Former U.S. senator Rick Santorum has deservedly lost his position at CNN for his April speech in which he described all of Native American culture as “nothing.” But he made that remark in service to an equally suspect claim: that America “was born of the people who came here pursuing religious liberty to practice their faith, to live as they ought to live and have the freedom to do so. Religious liberty.” Contrary to Santorum’s rosy picture, many of the English settlers of what is now the east coast of the United States were as devoted to denying religious liberty to others as they were to securing their own ability to worship as they pleased. And as a committed Catholic, Santorum should know that for many Protestants, “religious liberty” meant attacking the Catholic Church.

The first English monarchs to back colonization hoped to contain Catholic expansion with what historian Carla Gardina Pestana calls “a Protestant empire.” While some colonies persecuted dissenters—whipping Baptists and Quakers—most tolerated varieties of Protestantism. But the settlers often drew the line at Catholicism. Each November, colonists celebrated “Pope’s Day” by lighting bonfires, firing cannon, and marching effigies of the pontiff through the streets, all to celebrate their common Protestant identity. Colonial governments outlawed Catholic priests, threatening them with life imprisonment or death. Even Maryland, founded in part as a Catholic haven, eventually restricted Catholic worship.

The Revolution—secured with the help of Catholic Spain and France, as well as that of many American Catholics—toned down some of the most vicious anti-Catholicism. Most American Protestants learned to respect and live with their Catholic neighbors. But while the United States Constitution forbade the establishment of religion or religious tests for office, individual states continued to privilege Protestantism. Some limited office holding to Protestants, declared Protestantism the official religion, and, most commonly, assigned the King James Bible in public schools, over the objections of Catholics.

Political anti-Catholicism gained new adherents in the 1830s, in response to both Catholic Emancipation in the British Empire and increased Irish Catholic immigration to the United States. In 1835, New York’s Protestant Association debated the question, “Is Popery compatible with civil liberty?” In 1840, a popular Protestant pastor warned that “It has been the favourite policy of popish priests to represent Romanism as a harmless thing.” “If they ever succeed in making this impression general,” he continued, “we may well tremble for the liberties of our country. It is a startling truth that popery and civil and religious liberty cannot flourish on the same soil; popery is death to both!”

Such beliefs led anti-Catholics to attack Catholic institutions as alien intruders. In August 1834, a mob burned down the Ursuline convent in Charlestown, Massachusetts, acting in the conviction the they were protecting American liberty against an institution that “‘ought not to be allow[e]d in a free country.’’ Five years later, a Baltimore mob threatened a convent there with a similar fate. As Irish immigrants filled both the pews and pulpits of American Catholic churches, such anti-Catholicism merged with a nativist movement that hoped to restrict immigration and make naturalization difficult.

The most sustained attack against Catholics came in Philadelphia in the spring and summer of 1844. Inspired by the success of a third-party nativist candidate in New York City’s mayoral election, Philadelphia nativists staged their own rallies throughout the city and its surrounding districts. In May, rallies in the largely Irish Catholic Third Ward of Kensington sparked three days of rioting. On the third day, nativist mobs burned two Catholic churches, along with the adjacent rectories and a seminary. Outside of one church, they built a bonfire of Bibles and other sacred texts, and cheered when the cross atop the church’s steeple collapsed in flame. In a nearby Catholic orphan asylum, the superioress wondered how she could evacuate nearly a hundred children if the mob attacked. “They have sworn vengeance against all the churches and their institutions,” she wrote. “We have every reason to expect the same fate.”

In the aftermath of the May riots, a priest in the heavily nativist district of Southwark resolved to prepare his church against future attacks. Along with his brother, he organized parishioners into a security force, armed with a collection of weapons ranging from surplus military muskets to bayonets stuck on brush handles. When, in July, the church’s neighbors realized the extent of his preparations, they concluded that the Catholics were planning to murder their Protestant neighbors in their sleep. Mobbing the church, they launched a second wave of riots, and even bombarded the church with a stolen cannon. Eventually, the county’s militia arrived in force and fired into the crowd. By the time the fighting was over, two dozen Americans were dead, and the nation was in shock.

Throughout all of this, leading nativists insisted that they tolerated all religions. “We do not interfere with any man’s religious creed or religious liberty,” asserted one. “A man may be a Turk, a Jew or a Christian, a Catholic, Methodist or a Presbyterian, and we say nothing against it, but accord to all a liberty of conscience.” He then immediately revealed the limits of his tolerance: “When we remember that our Pilgrim Fathers landed on Plymouth rock, to establish the Protestant religion, free from persecution, we must contend that this was and always will be a Protestant country!” That second sentiment—the insistence that the country truly belonged to members of one creed—explains the fury of the mob.

The same cramped view of religious liberty echoes in Santorum’s speech. As a Catholic, Santorum unsurprisingly identifies America with “the morals and teachings of Jesus Christ,” rather than only Protestantism. He also calls the United States “a country that was based on Judeo-Christian principles,” letting Jews halfway into his club. But any effort to privilege some religions over others reminds us that purported advocates of tolerance may be religious supremacists under the skin. Pursuing religious liberty for one’s own kind is only the beginning of freedom. Securing liberty to all is the true achievement.